Southeast Alaska on the Fly - Day One 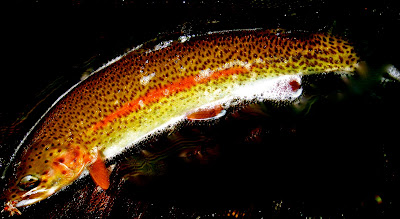 Ketchikan is an island town in Southeast Alaska.  Located in the Tongass National Forest, the area receives a significant amount of rain, and has a prolific Salmon run.   Once a logging and fishing town, the loggers have long since disappeared, being replaced by the thousands of tourists that flood the small city every day in the summer.  I was born and raised in this area, and a lot has changed.  I guess I'm getting old, because I long for the days when the town was a little more rough and authentic.  The town is one thing, and the area is another.  A person would be hard pressed to find a more beautiful area.  My folks live on Pennock Island; a place some would call "no-where Alaska."  There are no roads, fishermen are their neighbors, and they still live in a small rustic house more akin to a cabin.  I could talk at length about the area, but I guess I better talk about fishing....
Ketchikan is a salmon town.  My first job as a kid was commercial fishing.  I also worked as a deckhand on what we call "charter boats," which take tourists from the tour boats out on 4-8 hour fishing trips.  Folks around here don't fish for trout very often.  I guess when you can catch a 50 pound king salmon, a 15 inch rainbow is not all that appealing.  I fished for trout only when camping as a kid, and never on a fly-rod.  After a few days in town, we loaded up my dad's boat for a 20 mile trip north to a watershed accessible only by boat or plane.  An hour later, I was dropped off on a dock right below a salt-chuck, while my dad took my sister, her fiance, and my wife out Halibut fishing. 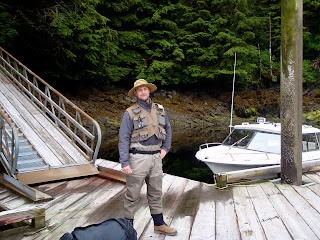 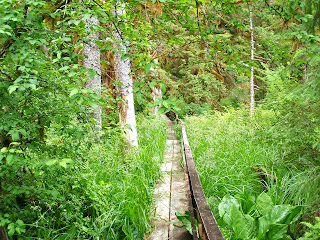 I had about 4 hours to hike and fish.  I followed an old forest service trail my dad had helped build some 35 year prior around the salt-water lagoon.
Bear sign was everywhere, and it was wet.  A few deer were near the trail licking the salt covered weeds and rocks on the bank of the lagoon.  After two miles, I arrived at the river where it entered the lagoon.  I hiked another half mile up the river and stopped to ponder the landscape.  At the risk of overstating the situation, I found it to be perfect.  An easy flow, with plenty of room for my 9 foot 5 weight rod.  The trail was a little precarious at this point, but I bush-wacked until I arrived at an old bridge that crosses the river.  I climbed down the 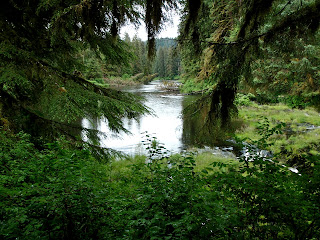 steep bank and started casting.  The rain started coming down pretty hard, and it was probably 48 degrees.  I had no idea what to use, so I tied on a huge bushy stimulator/caddis looking fly just to get a feel for things.  After a few casts, I was getting little tugs here and there.  It took me a while, and to be honest I was quite surprised that I was getting any action.  After missing numerous strikes, I realized these fish required some effort in setting the hook.  I finally got one on and quickly realized I had a decent fish on my line.  I got him within leader length and saw that I had a 14 inch trout on my line.  I reached for my net and he took off.  I didn't see him again.  I was now excited - quality sized wild native trout.  My next few casts resulted in multiple strikes on every drift, but I couldn't hook up.  After 15 minutes and dozens of missed strikes I pulled in my line and looked at my fly.  The first trout I had lost had bent my hook completely straight.  I used my pliers to re-bend the hook.  Suddenly, a hatch of what looked like a Cahills and some other bug which I can only describe as looking like an Adams fly pattern, filled the air.  I tied on an Adams dropper and proceeded to land about 5 nice bows all around 10-12 inches.  The rain started to come down hard, so I migrated down river a few hundred yards until I found what may be the best run I've ever fished.  The hatch had died out a little due to the rain, but the fish were hungry.  The run I was on consisted of about 25 yards of shallow fast water that narrowed into a 12 yard drop-off pool.  The fish were sitting in that pool.  I would drift my fly just above the pool and the fish would dart up and grab it on almost every swing.  I managed to land another 1/2 dozen bows, including three that were 14-15 inches. These were by far the best wild bows I had ever caught.  I was constantly re-bending my hooks due to the fight these trout put on.  Unfortunately, I had to leave.  I hiked out and met my dad and our crew at the dock.  I had fished about 1.5 hours.  I was soaked to the bone and freezing, but I don't know that I could have asked for a better fly fishing experience.  The day was topped off when we saw a humpback whale and her calf roaming in Clarence Strait on the way home.  I knew I would have to return to this amazing river.