I had the opportunity to fish the Toccoa DH for a few hours over the long weekend.  I went for about an hour on Thanksgiving morning.  I had not checked the water levels and didn't realize it was pushing around 600.   Wading was a little difficult, but I managed to wade in at a few spots and fool a couple of trout.  Saturday afternoon I went to the lower section of the DH to get in an hour of fishing before dark. I waded in and quickly realized the fish were hugging the bottom. I tied on a large jig hook and then dropped a small warrior off the back. I picked up a few fish and waded out as it got dark.  I spotted someone fishing with worms and probably poaching. I approached and the poacher immediately left. I then high-sticked a shallow run and picked up a nice fat rainbow as darkness fell.
I need to find some time to spend an entire day fishing the river. Bright colors and heavy flies seem to be the ticket. The fish have spread out and they have "wisened up" over the last month. 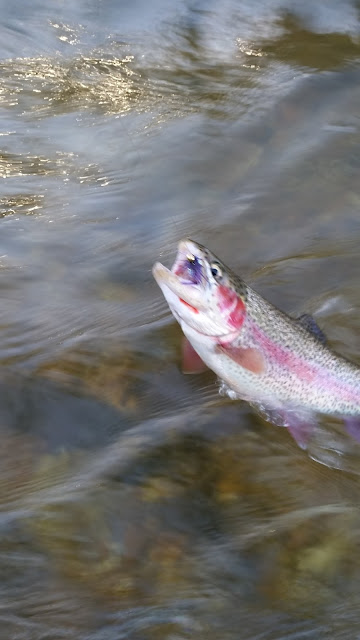 About 10 years ago EZ re-ignited my love of fishing with a trip to the Smokies.  Thereafter, we fished on a regular and frequent basis, with an energy that I think comes with youth and fewer obligations.  Doc joined the fray a few years later and we started doing 1-2 group trips a year to local streams.  Eventually Rod joined along on the trips. The trips generally involved camping, and usually an extra person or two came along for the fun.  Now, we all have kids, busy business lives, and as a result, the trips have become less frequent, shorter, and camping has become a thing of the past.

I had not fished with EZ in a couple of years, and hadn't fished with Doc and Rod in about a year.  I was looking forward to our annual Blue Ridge trip; however, the heavy rain early in the week put a damper on things.  We had planned to float Friday, but the rain derailed that plan. Doc and EZ had business obligations, so it was left to the Rod and I to find a place to fish on Friday. The only thing that came to mind was Noontootla.

Noontootla is tough fishing in my book. The water is clear, the brush is thick, and the fish are easily spooked.  I've known many a good angler to be skunked on Noontootla.  I figured we'd go up there and at least enjoy a beautiful day.  Much to my surprise, I caught a nice rainbow at the first hole.  I managed three in a few hours, and then we headed back to the cabin for some whiskey. 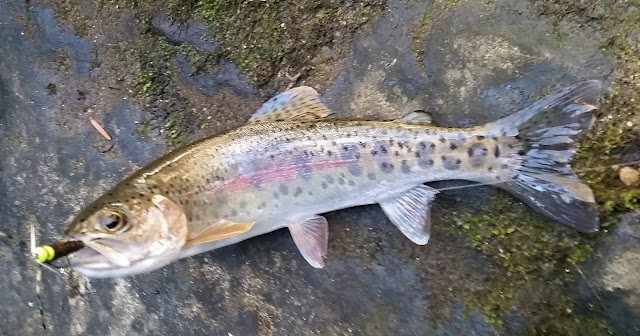 We met Doc and EZ at the Blue Ridge Brewery friday evening, and then finished up the night with darts at Fightingtown Tavern.  The next morning we woke up and took it easy - it was cold.  We went to Van Zants and ate the breakfast special, and then up to Noontootla.  EZ hasn't fished much lately, but he caught a brown right off the bat.  I caught a couple of bows as well.  The action was pretty good at the beginning, with Streamer Rod even catching a nice b
ow for good measure.  We worked our way downstream and fished hard. I missed a lot of fish.  At the end of the day Doc hiked up Lovinggood creek and caught three bows in short order.  We had a good day on the creek, and everyone managed to avoid the skunk! 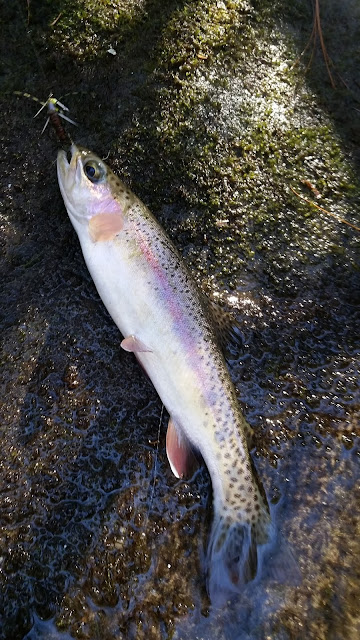 I mentioned in a prior post that while I was in Yellowstone my Sage Z-axis 6 weight endured a damaged guide.  I decided to bite the bullet and send it in for repair.  The warranty process through Sage works quite well. You make your claim online, pay them some money on a credit card, and then a shipping label is generated for the rod to be mailed via FedEx. I think the total charge was around $60.  Once your rod is received by Sage you receive an email confirming same.  It ended up taking about 4-6 weeks to get my rod back.  I was thinking that perhaps I had made a mistake in spending that much money to fix a bent guide, but when I took the rod out of the package, I was quite pleased. The rod looked brand new.  I double checked the serial number, and it was the same rod.  Not only did they fix the guide, it appears they either replaced or refinished the cork handle, as well as the wood insert and the reel seat.  I was extremely impressed.  I guess you pay a little more for quality, and it's worth the cost.  Kudos to Sage! 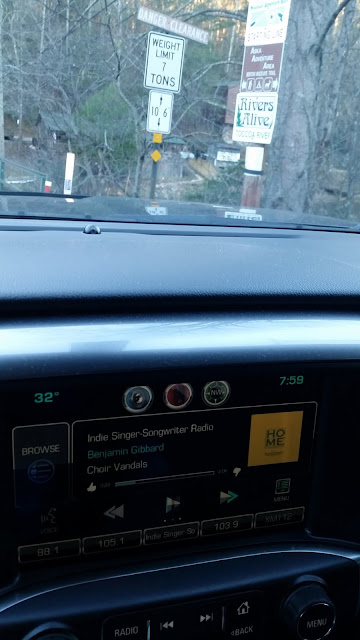 I woke up early Saturday morning and decided to wet a line on the Toccoa DH for an hour before the TU meeting.  It was cold: 32 degrees when I hit the river at 8:00. I didn't have a coat and the water was high. I tied on a small ugly green bugger and roll casted my 5 weight from 3-4 different locations.   I ended up with a handful in an hour.  All rainbows and fat.  The next morning I went through the same routine with a couple to hand. I covered a lot more water. I was surprised the fish were not in the lower sections where I expected them.  I'm sure they'll spread out over the next week. 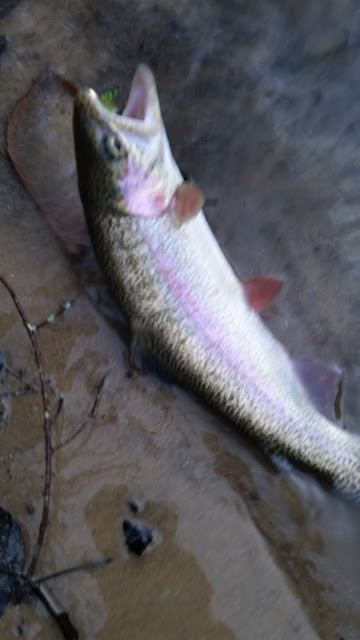 As far as the TU meeting, I learned some interesting information on the Toccoa tailwater.  They shocked up a 14 pound brown during a recent survey. They found the fish numbers down a little, but the browns are doing well.  The tailwater is pretty good for brown trout, with about 10% surviving, with some reproduction suspected.  The rainbows, on the other hand, do not thrive in the tailwater, with an estimated 1% surviving after stocking.  The brook trout simply disappear within a few weeks of stocking.  Angler frustration over catch rates recently is probably the result of less stocking over the last year or two.  A few years ago they were stocking around 40k trout. This year it's been closer to 26k.  Also, brown trout are tougher to catch, so even though the browns seems to do pretty well in the river, people aren't catching them like they would a rainbow, and hence, less angler satisfaction. 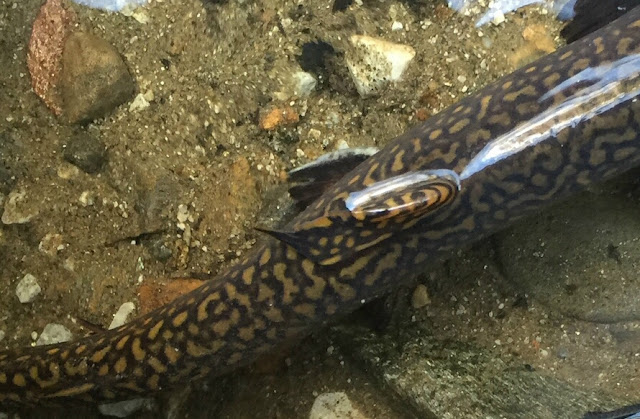 I drove up to meet the crew at Snowbird on Friday for our annual North Carolina fall trip.  As in years past, Snowbird did not disappoint. I ended up with about 20 fish to hand, including a slam (brook, brown, and a rainbow).  By far the majority of the fish were rainbows.  I was surprised at how many wild rainbows I caught in the DH section.
On Saturday we decided to check out the Ravens Fork Trophy Section.  It was much more crowded than expected, and it was slow going in the morning. I was able to spot a number of fish, but they just weren't moving.  We started out up high. After lunch, we went down to the lower section. I had fished meat in the morning and decided to go small in the afternoon. Small was the ticket.  I caught a handful in the afternoon. I lost my best fish of day after a pretty long battle.  Next time I'm bringing a landing net.  One guy in our group caught a 23 inch pig using my 8 weight.  Most of the fish I caught were in the 14 inch range. The picture below is typical of what I was catching.  A good two days of fishing! 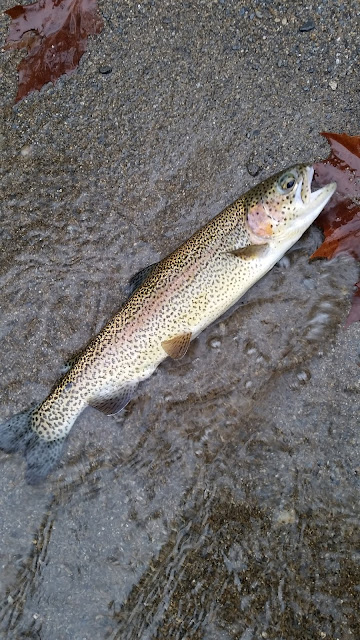