Caught this beauty on 6x tippet and a size 18 fly tailing three feet behind a huge ugly stone fly. First time fishing the Yellowstone - what a treat!

My original plan was to hike up to the first meadow on Slough Creek. We got a late start, and the rest of my group didn't think we'd have time for me to hike up there, so we fished the lower meadow.  It started out pretty rough. I picked a nice run but had a bunch of buffalo and a beaver run me off.  I only got to fish for maybe an hour. We returned to the car and ate lunch. We all decided to keep fishing, so I hiked downstream. It was hot and relatively crowded. As I stopped to tie up a technical rig I heard another in our group yelling upstream that he had a nice fish. A nice fish indeed - big cuttbow on some sort of small prince pattern. 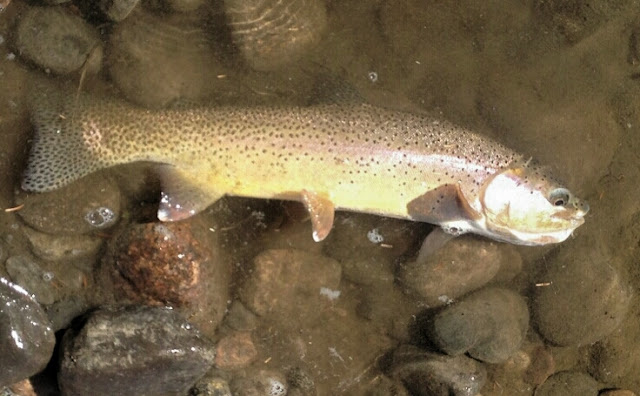 I worked on down stream and got to a strange split in the creek. I chucked a hopper and couldn't believe it when I saw a huge trout rise to the fly and then turn around.  I thought perhaps it was an illusion.  I worked to a nice run a little further downstream and right in the foam line were 3-4 beautiful cutties slow rising to something in the water. I spent 2 hours trying everything in my fly box, but I couldn't figure it out.  I finally gave up. I figured if 7x tippet and a size 22 bwo couldn't catch one of those cutties, nothing would.  I'll be back, though.
We took a short trip to soda butte to try to get the skunk off from Slough.  It was getting dark, but we managed a couple on soda butte.  Very interesting stream.  The highlight, of course, was the cuttbow pictured above.

Saturday was tough; though optimism ran high in the morning. We woke up to relatively warm weather. Breakfast was good. We drove to the parking lot at the Duck and just one other car - that was promising. We knew there were big fish in the Duck, but catching them would be a challenge. We all hiked up-stream and divided into pairs. I stuck with John. The water had no movement and the bottom was like sludge.  We worked our way downriver and got to a deep bend.  I fished the bend for a few minutes and then walked along the bank about 10 feet from the bend to give John a shot at it. A 15 inch brown swam by me towards the pool. 30 seconds later, a huge lake run brown, well over 25 inches, trudged upriver towards the pool. John was now working the pool and I gave him a heads up. He got a hit, but couldn't get the hook-up.  I then walked a little further downstream and saw three nice fish scatter. It seemed we had found the fish; however, they could not be fooled.  Brad caught a nice brookie, but the rest of us were skunked.

We then drove over to the Gallatin in the Park.  The weather was getting warm and there were plenty of people fishing. I high-sticked a small nymph in some runs and hooked into a nice fish. I thought it was a nice brown but it turned out to be a whitefish.  We all caught whitefish, but not a single trout.  One in our group wasn't feeling good (or else he just wanted to watch football!), so we dropped him off at the hotel and plotted our next move. I had noticed a few cars parked on the side of the road about a mile from where the Madison exits the park, so we pulled over to the gravel area. After a short hike we came out on a wonderful stretch of river. I caught a nice brown within a few minutes, swinging a big soft hackle.  It got dark quick and we had to leave, but this spot is high on my list for the next trip. 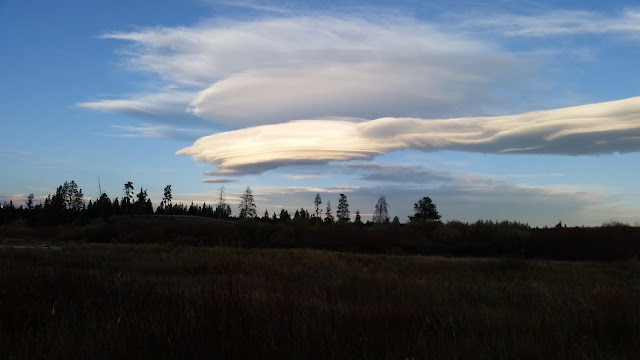 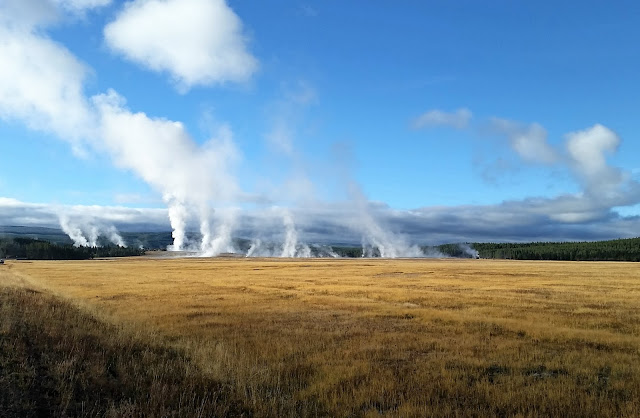 Friday, we returned to the Firehole.  This time, we fished up-high on the river.  It started out kind of slow for me.  I decided to swing a soft hackle and for the first 1/4 mile, there was very little action. I finally worked my way down to some nice runs and caught some decent fish.  The fish really turned on in the faster current and at the tail of the faster runs.  I noticed the fish tended to be bunched up in certain areas. After catching 1/2 dozen, I ended up at a small waterfall on the river, that was divided by an island. I changed flies a few times and decided to high stick the water with a size 18 flashy nymph.  I was immediately rewarded with a good catch of fish. I think I ended up with well over a dozen fish during the morning session. 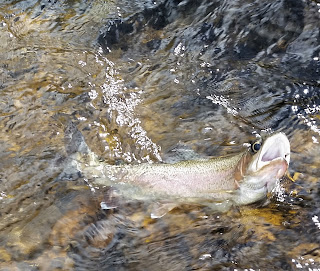 After fishing for a few hours we packed up and headed down river. We stopped to use the restroom at Nez Pearce confluence, and saw a lot of fish rising. We decided to try out luck. I had immediate success high sticking. I stuck with John and we worked our way down river a little. We caught 15-20 between us, but no fish of any size.
We finished the day by stopping off at the Gibbon on the way back to West Yellowstone.  Unfortunately, the good fortune we had a few nights prior was not in the offing this time.  I believe we were all skunked by the Gibbon, tough it was cool to share a bend in the river with this guy: 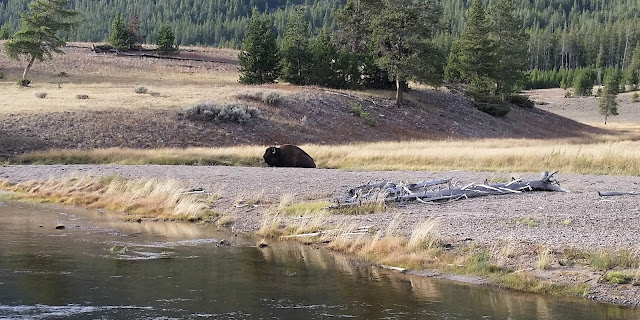 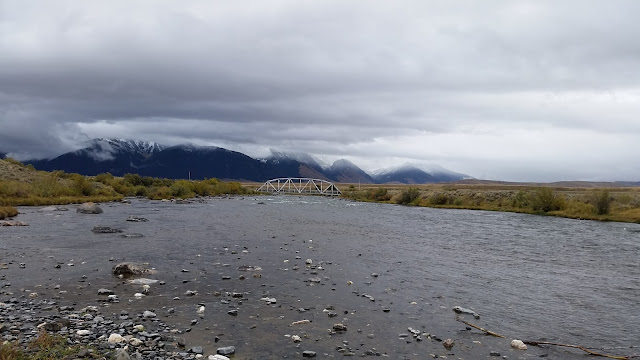 Thursday was cold.  We went to $3 dollar to try our luck; figured it would be a little warmer outside of the Park. I headed downstream on the road side of the river, chucking an articulated on my six weight.  The flow was much lower than last year, which made for easier wading.  I hooked in to a large fish in the main stream of the current within a few minutes of fishing. He thrashed back and forth, and after about 20 seconds, threw the hook. I saw the fish clearly, and it was a trophy to be sure.  John caught a decent rainbow shortly thereafter.  I decided to explore further downstream and fish a little along the way. I spoke with a few other anglers. The fishing was tough for everyone, and the only thing that seemed to be working were streamers.  Strangely enough, despite the cloud cover, lighter colored streamers were catching a few fish.  It started to snow after a few hours so I went back to the car to meet up with everyone.  We drove around trying to find a place to eat, but nothing was open.
We returned to $3 for the afternoon.  I worked my way upstream on the other side of the bridge, and right about the time I started to get in the water, the thunder emerged.  A cold rain mixed with snow was coming down by now. I put on a large black articulated streamer, and eventually waded out to the middle of the river. This allowed me to throw to the bank. I hooked a few fish, and finally, caught a nice brown.  My hands were numb, so I didn't take a picture.
I enjoyed the experience, even though we caught very few fish between the four of us.  We capped off the evening with a trip to the Grizzly, which is always a nice end to a day on the water.

Fire in the a.m., Gibbon in the evening

We fished the firehole in the morning.  The fishing was not as good as last year, but we all still managed a few trout - a good mix of browns and bows. The weather was crazy. It got cold and looked like it was about to snow. We then headed to the Gibbon for the afternoon.  I went with John and fished the lower meadow stretch. Our leader and LL went up towards the falls.  I tied on ugly bugger and landed a nice brown on the first cast. We then worked our way down stream throwing meat in the deep bends.  John hooked a nice one and brought it to hand -  a solid 18-20 inch rainbow - probably a run-up fish from the lake. A few minutes later I high sticked a bugger in a deep pool as I was standing on the shore and landed the nice brown shown below. We were cold but happy! 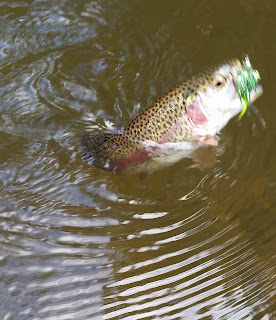 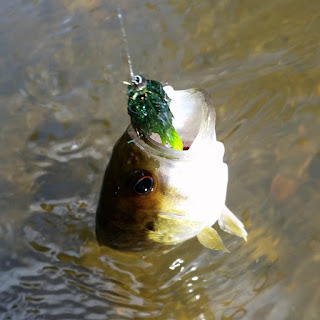