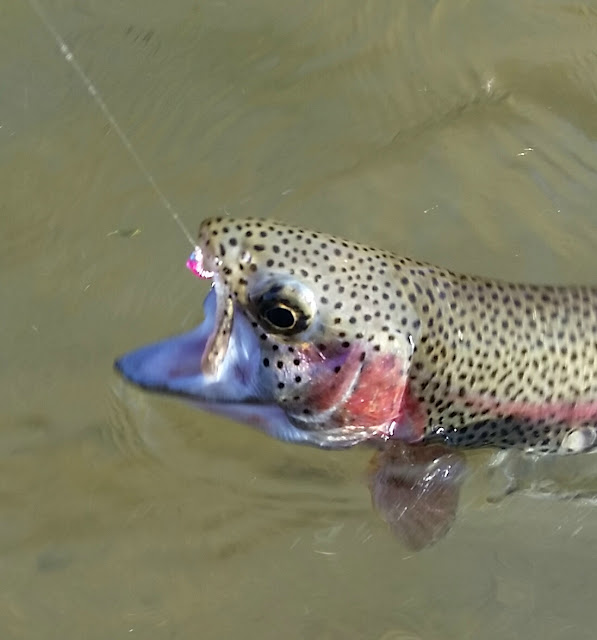 I was in Blue Ridge, Georgia over the weekend and decided to take a few hours and wet a line Saturday afternoon.  The weather was spectacular.  I was planning to head up to Noontootla, but on my way up I couldn't resist stopping by the Toccoa DH.  The water is still really high. I think it was about 1050 cfs - normal safe wading is around 350 cfs.  I managed to get in and over to a shallow run that I like to fish.  I started with a red headed black betty that I tied a short while ago.  Despite the size of the fly, it was quite productive euro style.  After about 10 fish, I wanted to try some different flies. I switched to a Holographic Ultimate Warrior, and surprisingly, caught nothing.  After a few drifts I switched to Frenchie. I immediately caught a few nice bows.  I then switched to a purple zebra midge, tied in the same method as the Hot Spot Blood Red Zebra Midge.   After a few unproductive drifts I dropped a slightly larger PT off the bend of the Midge, and immediately started catching more fish.  As I mentioned earlier, the weather was outstanding - probably around 55 degrees, but the water was cold. My feet started to get numb, and I didn't want to be on the water once the sun went down, so I made my way back to shore and called it a good day. 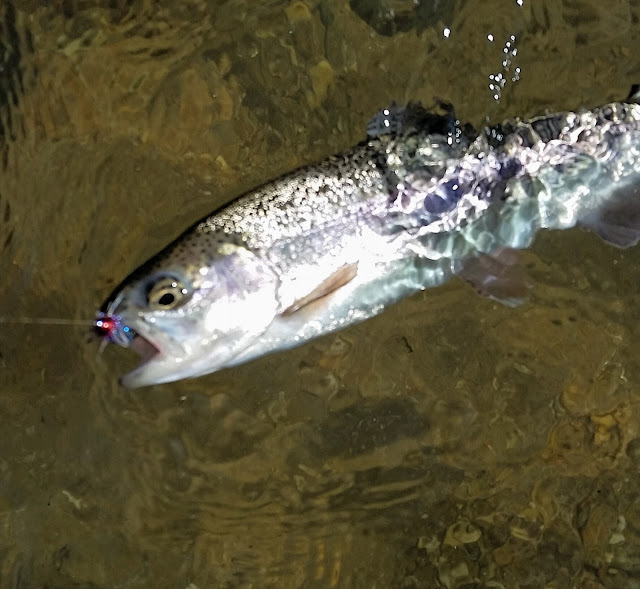 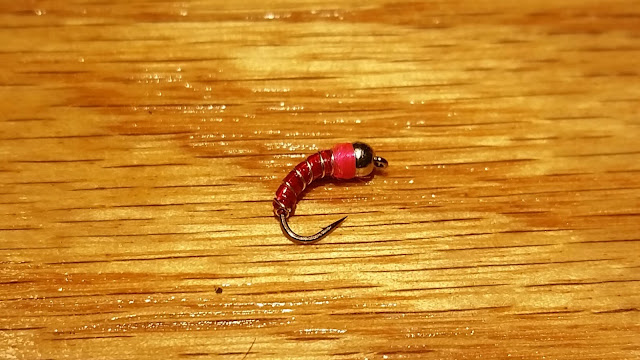 On the Vise: Olive Zebra Midge 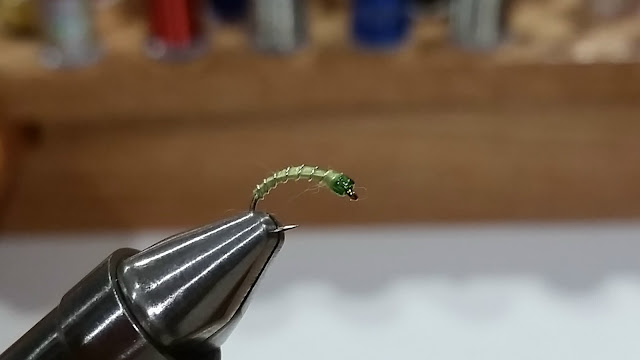 I went up to Blue Ridge, Georgia for the weekend. The weather was cold.  I went to the TU meeting Saturday morning, and decided to wet a line for an hour or two that afternoon. The temp was right around freezing. The water is still too high throughout most of the DH for safe wading.  I managed to get out in the river at a shallow part of the DH and fish a few runs.  I caught a handful of bows in an hour.  Considering the temperature, such a result wasn't too bad.   I suspect barring any signficiant rain the DH will be good-to-go in another week or two. 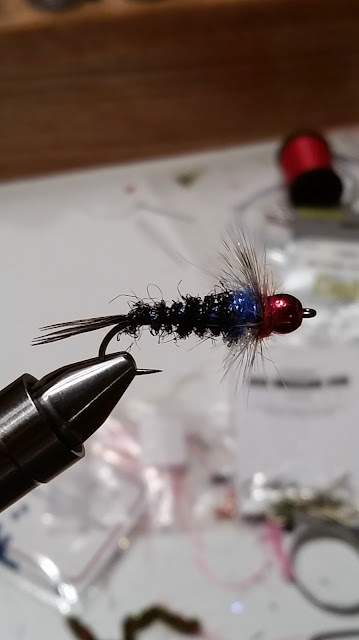 On the Vise: Modified Shuler 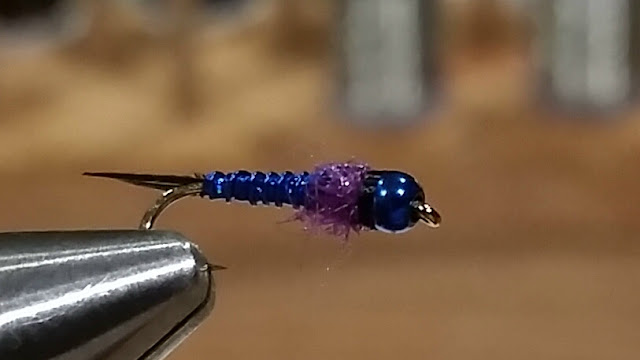 I tied this one up last night - inspired by Shuler's Midge.  Hopefully I'll be able to test it out this evening.

On the Vise: Messed up Lightning Bug 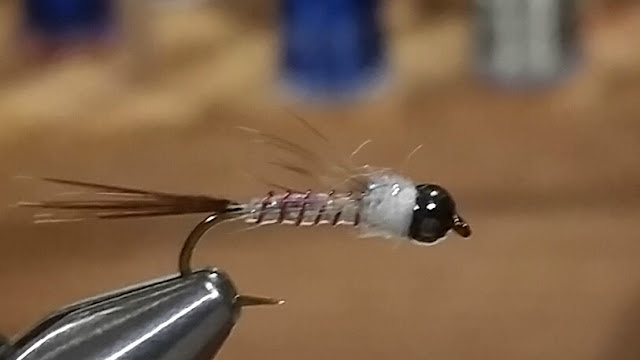 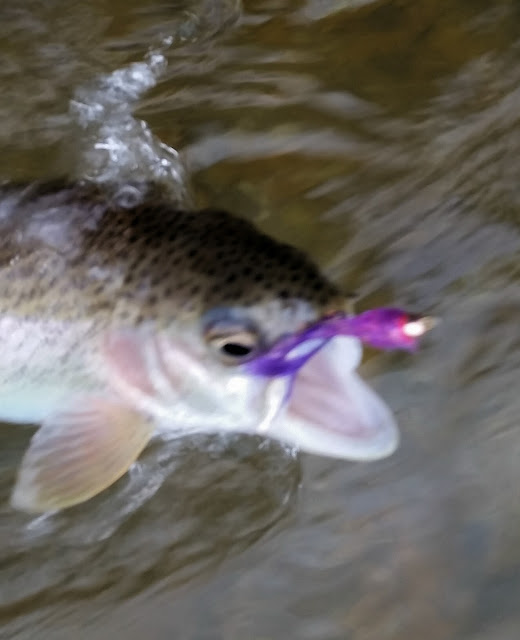 I was able to find a few hours to fish the Toccoa DH this weekend.  The water is still a little high for "safe" wading, but I know the river well enough to pick and choose the spots that are safe.  On Saturday, I started out by stopping at a popular spot on the lower stretch. I let my boys make a few casts with a spinning rod. They each caught a nice bow. We then went for a hike. It was obvious to me based on the ease by which my boys each caught fish that a stocking had taken place very recently.  Late that afternoon I returned to the river and fished for about an hour in the lower section. There were quite a few folks floating and fishing. Surprisingly, my streamer patterns were unproductive.  After about 30 minutes a huge hatch came off. I'm not sure what they were, but they looked like caddis. I've never seen a hatch on the Toccoa like what I saw on Saturday afternoon.  I put on a small frenchie and caught a good number of bows.  The wind picked up, so I started fishing a large pattern (size 8) I developed for DH fishing.  It worked on the swing pretty well, but surprising, it worked with great effect by high sticking.  I lost the fly towards the end of the day, but not before I had caught and landed a large number of fish. 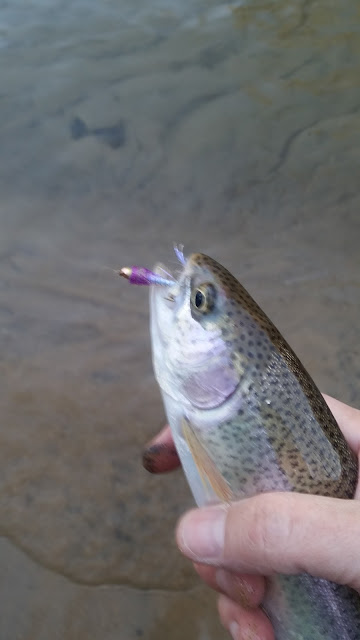 I woke up Sunday morning and sat down at the bench to tie two more of a fly I'm going to call "The Ultimate Warrior."  I went up to the middle section of the DH on Sunday.  I put in at a favorite spot and proceeded to catch about a dozen in short order. The fish were very good fighters. I then moved up to the power lines and made my way across the river.  Wading across the river was extremely difficult, and I don't recommend it.  After landing a few more I worked my way downstream trying to figure out how I was going to get back across the river.  I worked my way about 1/4 mile downstream and used tree branches near shore to help me through the heavy current and on to the shore.  I managed to fish The Ultimate Warrior the whole time - which was about two hours.  I spoke to another guy who was doing well on a big prince.  I think just about anything will work right now on the Toccoa DH.  I still can't quite figure out why the buggers didn't work for me.  My only guess is that because the current is a little heavy, and the buggers I tied were very light and bushy, the flies were not getting into the feeding lane.  The key is to get the flies deep.  Despite nice hatches on both days, I saw very few fish rising.  The fish are obviously fresh but hanging out deep.