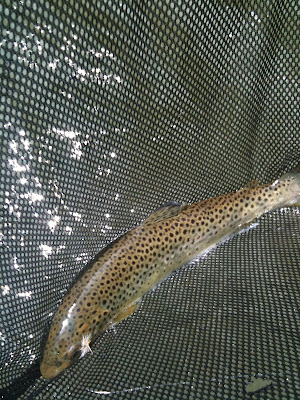 I was able to find a few hours for fishing on Memorial Day. I left the house at around noon, and had a decision to make: where to go. The HI was pushing 2 generators. The Elk was an option, but it's not my favorite river. I settled on the Toccoa hoping to catch a brown. After a rather long drive, I got to Horseshoe Bend and discovered that the river looked like chocolate milk. I drove on up to Curtis Switch. The water was a little better, but not much. I had driven too far not to fish
- I suited up and waded down river about 1/4 mile. I chucked a purple bugger and some nymphs for about 15 minutes as I was wading. No luck; not even a bite. Finally, I got to a good spot and saw a fish rise near the bank. I noticed a few sulphers and cahills in the air. I tied on a sulfer and finally got a good drift to the spot where I saw the fish: bang. Got him! I pulled him in after a decent fight and netted a nice 10 inch brown. Right after catching that fish, I got boxed in my two fishermen. One in front of me and one behind. I decided to wade down stream, on the far bank, to get away from the trap. I gave up my good fishing spot, but I don't like to be crowded. I finally made it down below a run and saw another fish rise. I had switched to a huge conehead bugger while I was wading downstream, but I switched back to the sulpher when I saw the rise. It took me about 10 casts, but I finally got a good cast towards the riser. Sure enough - he took it right off the top. Another brown - though a little smaller. The water suddenly started coming up and I scrambled back up river and was able to get out in time. I only got about 45 minutes of actual fishing time, and catching only two fish is normally not enjoyable, but two browns on a dry fly made my day!