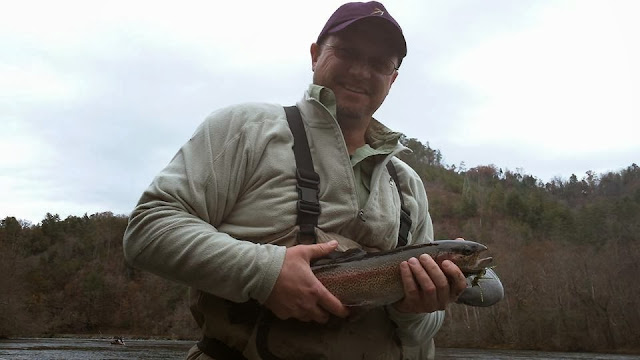 We had a group of four for our semi-annual overnight fishing trip.  This trip originally started a number of years ago with overnight camping/hiking trips, but it has been two years since we did a camping/fishing trip.  The last few years, the trip has become more about fishing, and less about hiking and camping.   For this trip, we set our home base in Blue Ridge, at The Gubna's cabin.
We started with a short float down the HI near Reliance, TN.  Rob caught a really nice bow on his 8 weight.  He's caught 2-3 20 plus inch fish on his 8 weight over the last year.  The rest of us have been stuck catching SNITs.
At the end of the float, we got into a whole mess of fish feeding on bwos.  I caught 25-30 bows, plus crappie and a brim.  One guy in our group caught baby browns, which was interesting.  Doc took off after the first float to check out the upper toccoa.  The three of us remaining did another float on the HI.  The 2nd float wasn't very productive, but a good time nonetheless.
We drove to Blue Ridge, at which point it turned into a strange adventure, with Streamer Rob getting his truck stuck in a ditch, and Hip Hop Will in rare form after numerous double crown and cokes.
We got up in the morning and hit the upper toccoa.  There was some debate among the group on whether to also fish snowbird, but we opted for a day at the upper toccoa.  Streamer Rob and Doc did well, catching a number of nice brookies and bows.  I think we caught 25-30 between the four of us.  We rounded it all out with pizza from Blue Jeans.
Can't wait for the next trip!

I fished the Toccoa DH for about an hour Friday evening. Caught a few fish on a variety of flies.  Action was about what I expected.  Fish were on the small side.  The water was as low as I've ever seen it.  I checked out another blue line for a few minutes as well. 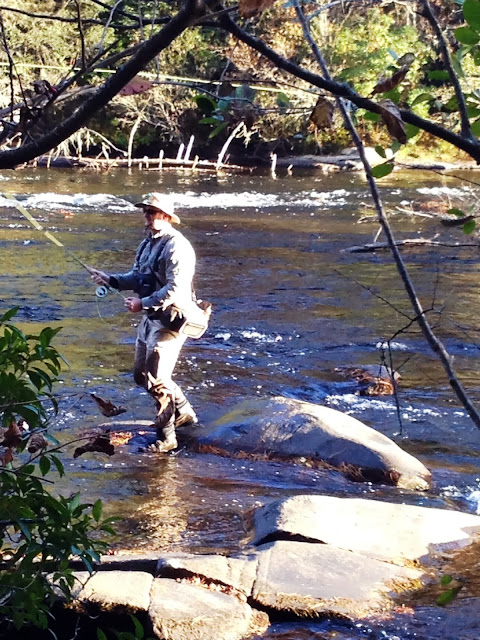 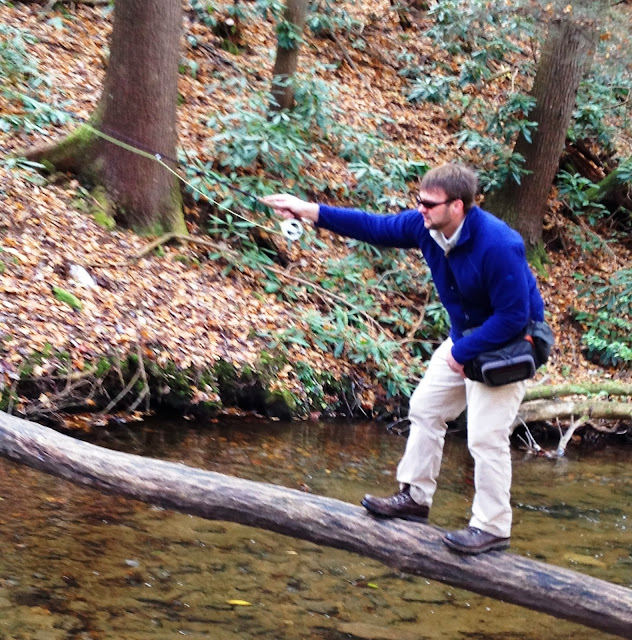 I had to go home, but one of the guys in our group managed this sweet brown on the last day of the trip: 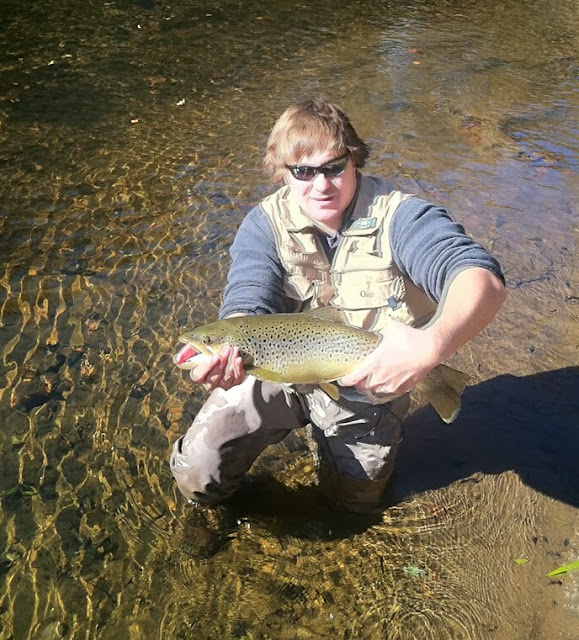 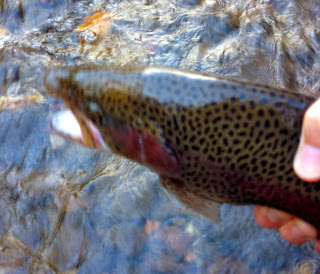 Four of us left Bryson City around 10:00 a.m. and headed up to a small creek in the woods.  We saw a lot of bear hunters, but not a single fisherman.  I got out of the car, walked to the creek and saw a 18 inch bow scatter.  I knew it was going to be a fun day! The four of us worked up and down stream.  I caught a few bows and brookies fairly quickly, but they were of standard size.  I made my way down stream scouting for big fish.  I came up on a small pocket of water under an overhanging tree, and much to my surprise, I saw two large rainbows feeding.  I got low in the water and started casting with short roll casts and bow and arrow casts.  I got the big bows to bite the fly 2 or 3 times, but couldn't get a hook-up.  I finally went with a big fly.  On the first cast, the fish bolted.  I exited the stream and went up river to fish.  After fishing for a few more hours it was about time to go.  I decided to take one last shot at those fish.  I went back to the spot and the two bows had returned. The rain started coming down hard and the other three in my group got in the car to leave.  After a few minutes I finally got the fish on - it was a heck of a fight on 6 x tippet and no net, but I finally landed the 18 inch female bow.  I tried to get a picture, but with the rain and trying to handle the large fish, I couldn't get a good picture.  Nevertheless, a hell of a day.  Between the four of us, we managed over 100 fish.  I didn't care about numbers - catching the big bow was all I needed! 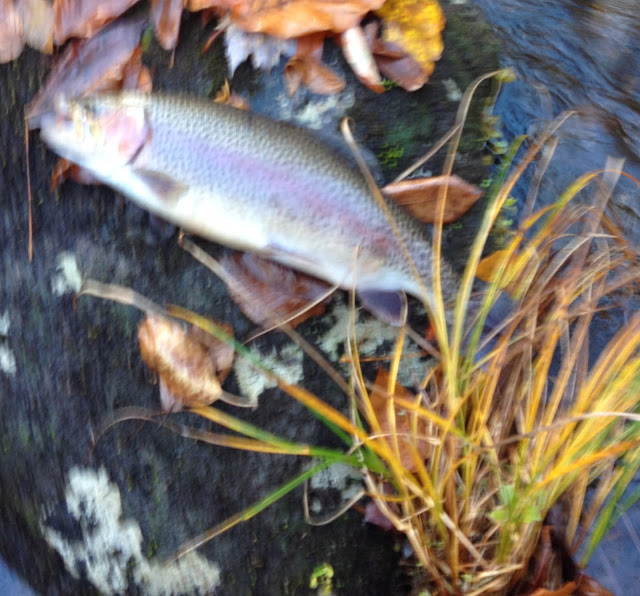 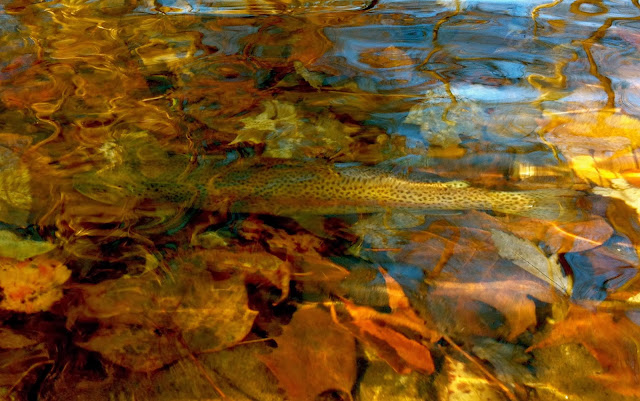 I left Friday morning and got to Cherokee at around 10:00 a.m.  We decided to try the Trophy Section at Raven's Fork. It was a disaster - couldn't cast without catching leaves.  Plus, the water was high and stained.  We tried it for a few hours and didn't get a single bite.  We left and went to a small stream right before dark.  It was a nasty location, but the water was good.  After catching a couple of small wild bows I managed to catch two 14 inch bows.  Also, I had a big bow break me off on 5 x tippet.  That little creek salvaged the day. 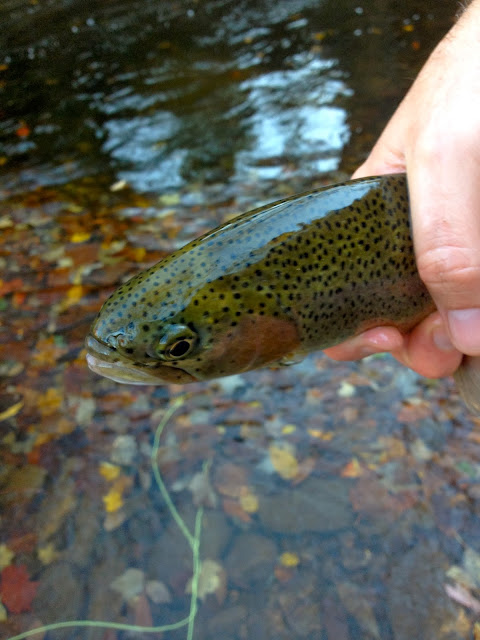 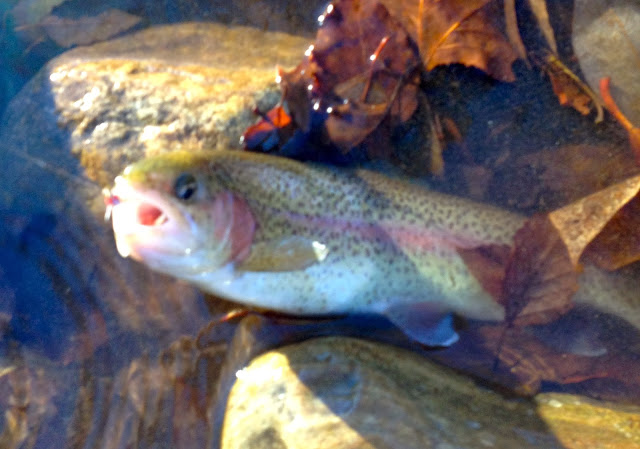