On Saturday we decided to take the kids on a family picnic.  I had never been to Cooper's Creek, but had heard it was a pretty area.  We packed up the kids and a lunch and headed to the campground.  I had read about Cooper's Creek as being a heavily stocked stream with a ton of fishing pressure. Never have I read or heard of any quality fishing coming out of the creek. When we got to the creek I was surprised that it was devoid of people. Other than a camper at Mulky Creek, there seemed to be nobody at Cooper's. We ate lunch at a picnic table and I took the kids on a hike upstream.  After about 30 minutes of hiking we started back. Out of the corner of my eye I thought I saw a fish rise.  I looked at the area for a few minutes and couldn't believe it when I saw a large rainbow treading water on the far bank.  I ran to the car and rigged up my six weight.  I didn't have time so I just threw a large caddis on the end of my line to see if I could move the fish. I couldn't, and the wife and kids weren't in the mood to watch me fish. I watched the water for a little while and was starting to wonder whether I was looking at a fish or just a rock.  Right before we left I took a rock from the bank and threw it over towards the fish. Sure enough, the fish scattered up stream. The fish was 20 plus inches. 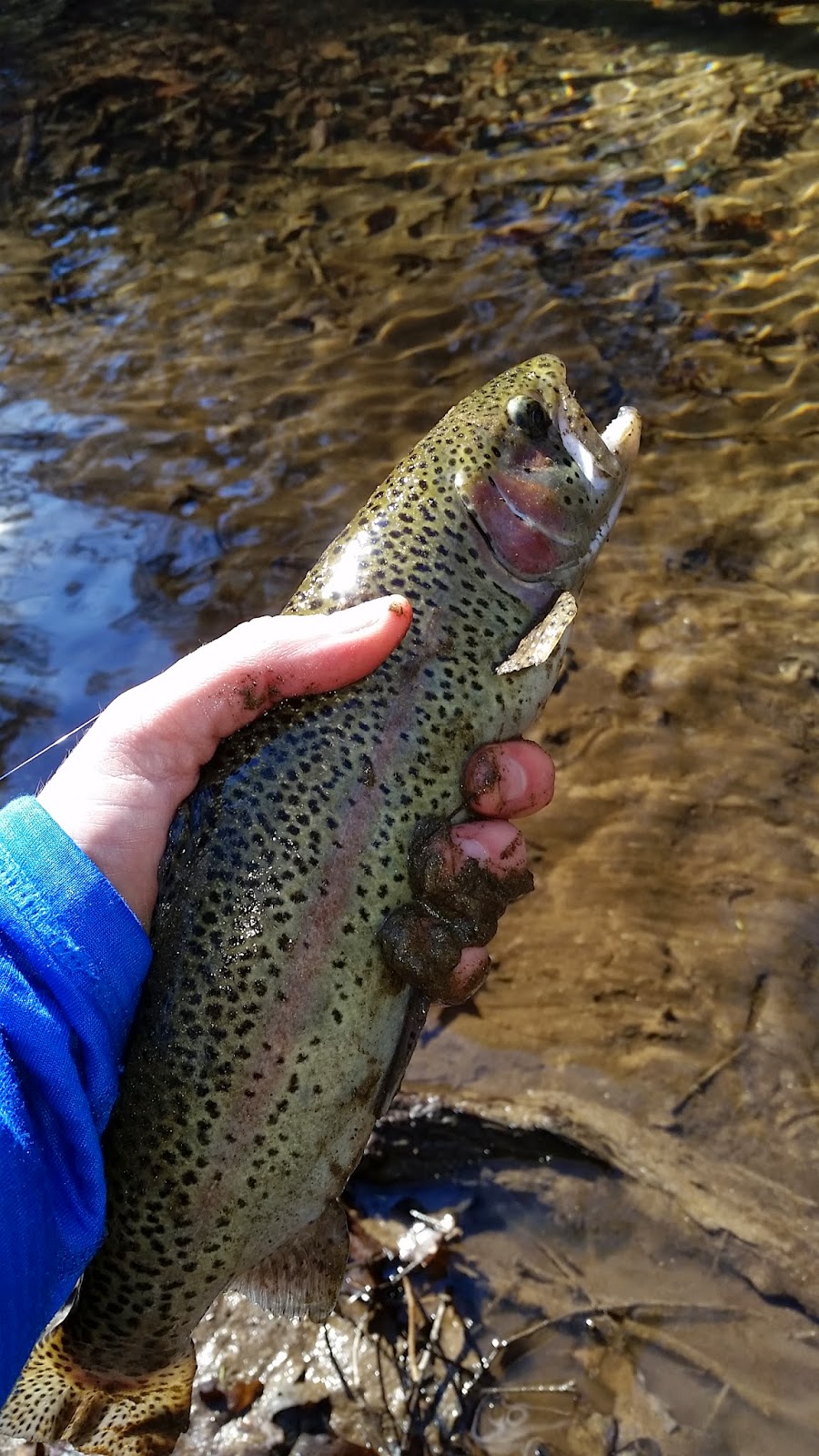 The next morning I woke up and drove over to the same spot.  I got out of my truck and went to the area where I saw the fish from the day before.  Strangely enough, there were two large fish now in the same spot.  I decided to go big - I tied on a huge stone fly pattern from Montana and waited for my opportunity.  I saw the two fish move towards the middle of the creek.  One was over 16 inches hanging out with the big one nearby.  I didn't put on waders or boots - I figured I'd spook the fish if I touched the water.  I didn't have room to backcast and I knew I'd only get one shot.  I put some line out and performed a back hand roll cast with the fly landing about 10 feet upstream of the two fish.  The water was crystal clear.  As the big bug drifted right in front of the two fish I saw one move forward.  I lifted my rod tip and there it was - fish on!  I was standing on a bank with a four foot drop to the creek.  I got the fish on my reel, but soon realized I hadn't hooked the big one - but it was still a large fish.  I managed to walk upstream, around a streamside tree, and down to a spot where I could get to the water. Although it wasn't the exact fish I wanted, it was a pleasant surprise to catch such a quality fish under the circumstances.  I watched the area for about an hour hoping the big one would come back, but I had spooked him, and so I left knowing I would need to make another trip in the near future.