Earlier this year I parted ways with my G. Loomis 8 weight.  I didn't realize how much I would miss having an 8 weight.  I debated the last few months between various rods, and ultimately decided to go with a TFO BVK.  I must admit, I was hesitant to pull the trigger on a non-american made rod.  At the end of the day, though, I simply couldn't justify spending $700 plus dollars on a rod that I only use a few times per year for chucking large streamers.  I used the BVK on Saturday and was very impressed. The rod is fast, but still has some touch.  I was using sink tip with articulated streamers, and didn't have any problem with accuracy or distance.   I was shocked by how light the rod felt, not only in the hand, but during casting. The weight is listed at 3.2 ounces.  I didn't know the weight until I looked it up today.  It feels as light as my Sage Z-Axis 6 weight.  Strangely enough, the 8 weight BVK felt much lighter than the 5 weight I was using during the same day.  I rate the rod as high or higher than the G. Loomis I was using before.  My only complaints thus far are as follows:
1.  The rod did not come with a case, which is absurd.  Any decent quality rod should come with a case.
2. The alignment dots are a little off.
3. The reel seat seems a little small.  I much preferred the Loomis set up with regard to the reel seat.
I am very happy with the purchase.  Now I need to put it to the test on a big brown.  I hope to have that opportunity later this week.

October brown on a dry 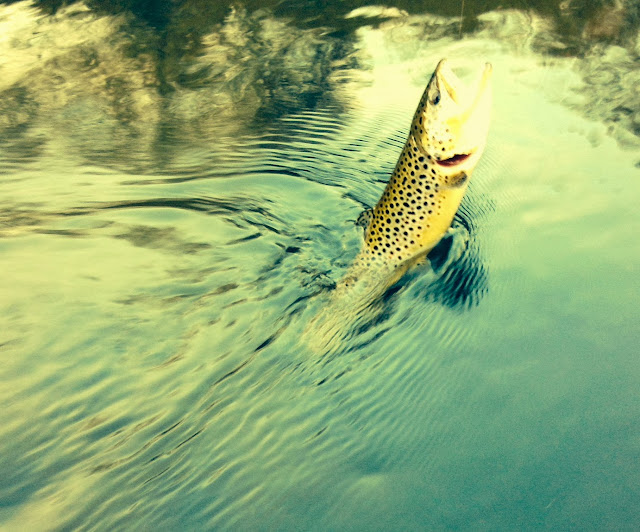 I fished the tailwater below the dam for a few minutes Saturday evening.  The water was much warmer than normal.  Apparently, it rained so much this year that the lake does not have a cold water reserve.  The fishing was off to say the least.  I caught a blue gill, which is not a good sign. I talked with others who said they got skunked.  I hope things turn around this winter.
No comments:

This morning I received an email from Congressman Chuck Fleischmann as follows:

Thank you for contacting me with your concern for the federal fish hatcheries in Tennessee. I appreciate you taking the time to reach out to me, and it is an honor to represent you in Congress.

As you may know, locks and dams can have a worrisome impact on fish populations. Like you, I believe it is an important to restore fish populations in areas negatively impacted by such structures. Nearly 900,000 Tennesseans and visitors buy fishing licenses, and they depend on our fish hatcheries to replace trout in Tennessee.
You may be pleased to hear that the Tennessee Valley Authority (TVA), the Tennessee Wildlife Resources Agency (TWRA), the U.S. Fish & Wildlife Service (FWS), and the Georgia Department of Natural Resources (GADNR) recently announced an agreement to continue popular trout stocking programs in the Tennessee Valley region. TVA will provide more than $900,000 per year over the next three years to support federal fish hatchery operations that provide trout for stocking. The stocking will occur in reservoirs and tailwaters of certain TVA dams in the region. In addition, these agencies also signed an agreement to form a working group with key stakeholders who benefit from the recreation-based trout stocking to identify a long-term funding source.
U.S. Fish and Wildlife Director Dan Ashe was recently quoted as saying the Obama administration has no "imminent" plan to close any federal fish hatcheries but the facilities are endangered by another round of automatic budget cuts next year. Despite this concern, you can rest assured that I will continue to work my colleagues in Congress to find a long term solution for our hatcheries.
Thank you again for contact me with your input. Please don't hesitate to contact me if I may be of further assistance.
Sincerely,

I haven't been able to hit the water much lately, but next month is looking good.  I have plans to fish a number of rivers, including the: Davidson and Nanny in North Carolina, upper and lower Toccoa in Georgia, Little Red River in Arkansas, and the Hiwassee DH in Tennessee. With the mild summer in the region, I'm hoping November will be on fire!  Reports to come....
The Gubna!
No comments: