The Caney Fork on Father's Day 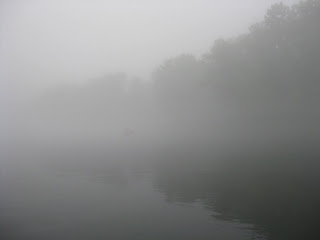 I drove the kids to Cookeville on Saturday night to spend the night with my Sister. I was able to get away on Sunday morning for a couple of hours to fish the Caney Fork below Center Hill dam. The Caney is known for having really large brown's, but the recent flood in Nashville has really put a dent in the trout population. I did some reading before I left and the only thing people were catching are "stocker brats"......6-8 inch fish. There were also reports of catching stocked brookie's.

I arrived at Happy Hollow boat ramp, which is about 5 miles below the dam, at 6am central time. TVA had stopped running 1 generator at 3am so I thought the water would be down when I arrived. I was wrong. I nice gentleman launch a kayak told me in would start dropping soon and that most waders fished below the ramp. Since I had never fished the Caney he recommended that I go upstream because it was easier wading. Parts of the river are a sand bottom which can make wading dangerous. I rigid up a double nymph with a bead head SH Hare's Ear on top and a midge that I tied on the bottom. I call it Christmas midge because it has a green peacock body wrapped with red wire. I slowly worked my way out and soon found a few fish rising. After about 10 casts I had my first fish....a 8 in rainbow (aka stocker brat). He took the Xmas midge on the swing. It was good to have a fish to hand. About 5 minutes later a fish slammed my line. This felt like a much better fish. I had a lot of line out and Was having a hard time getting him on the reel. Once I did he just sat on the bottom. I gave him some time to contemplate his next move, which turned out to be a run upstream. That was his undoing as I was able to get him in the net pretty quickly. He was not as large as what I expected....13-14 inch rainbow, but he was fat. 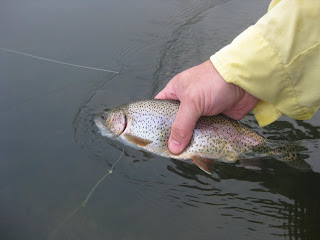 He took the Hare's Ear. I caught 2 more fish after that, both of them  rainbows in the 8-10 in range. One took the midge, the other the Hare's Ear. As I was leaving an old timer stopped me and said he noticed me catching some fish and asked what I was using. After telling him, he said he had tried every midge in his box. I looked down at his rod and he had a can of corn and was baiting the hook on his nymph with a kernal!