Chucking meat on the Gibbon 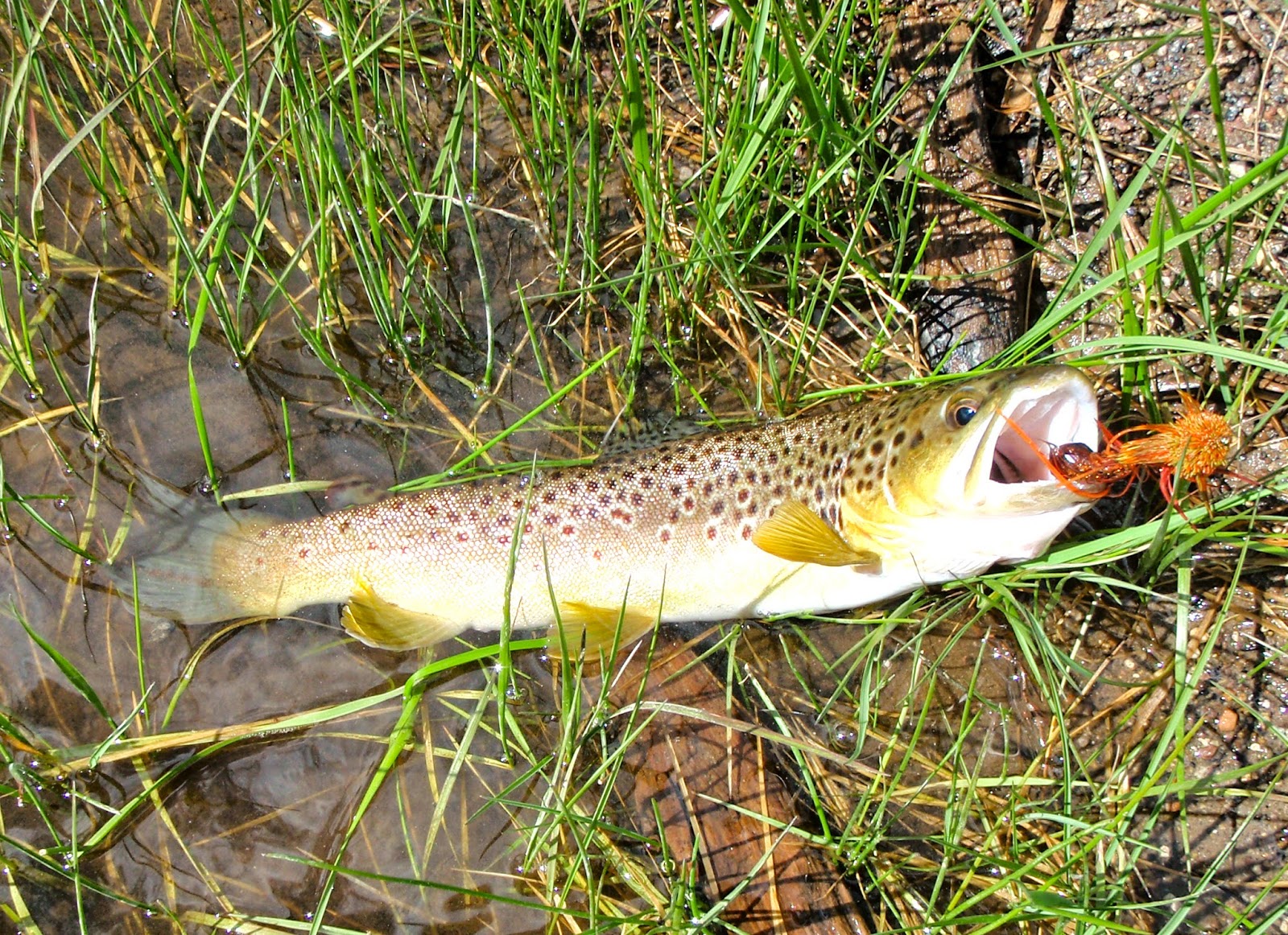 Armed with a Zoo Cougar, the guys dropped me off on the lower Gibbon River.  I rigged up my 6 weight and started chucking meat. I immediately had a huge bow chase the meat from under the bank, but he turned at the last minute.  After a few more chase and rejections, a few hungry meat eaters came out for dinner! 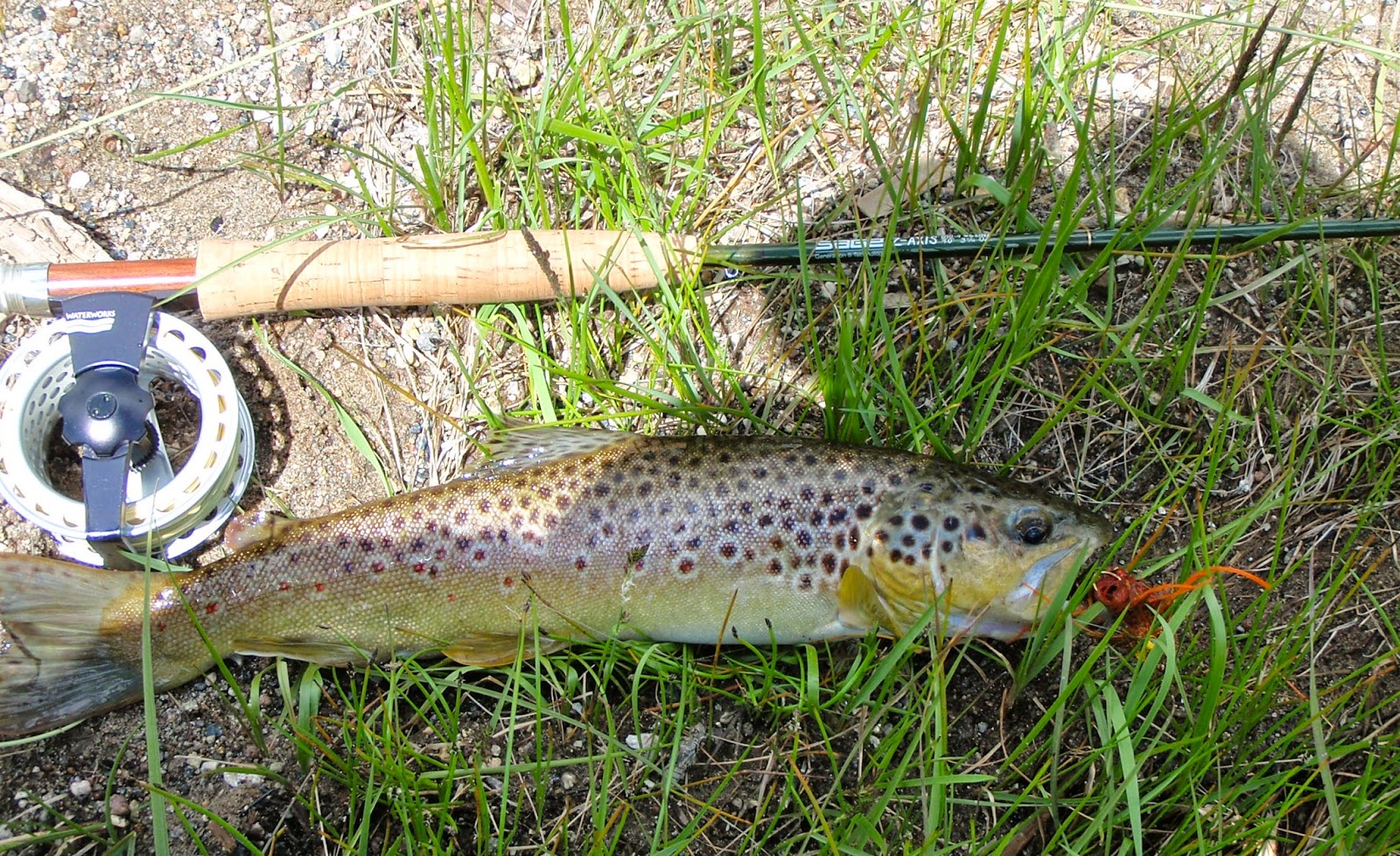 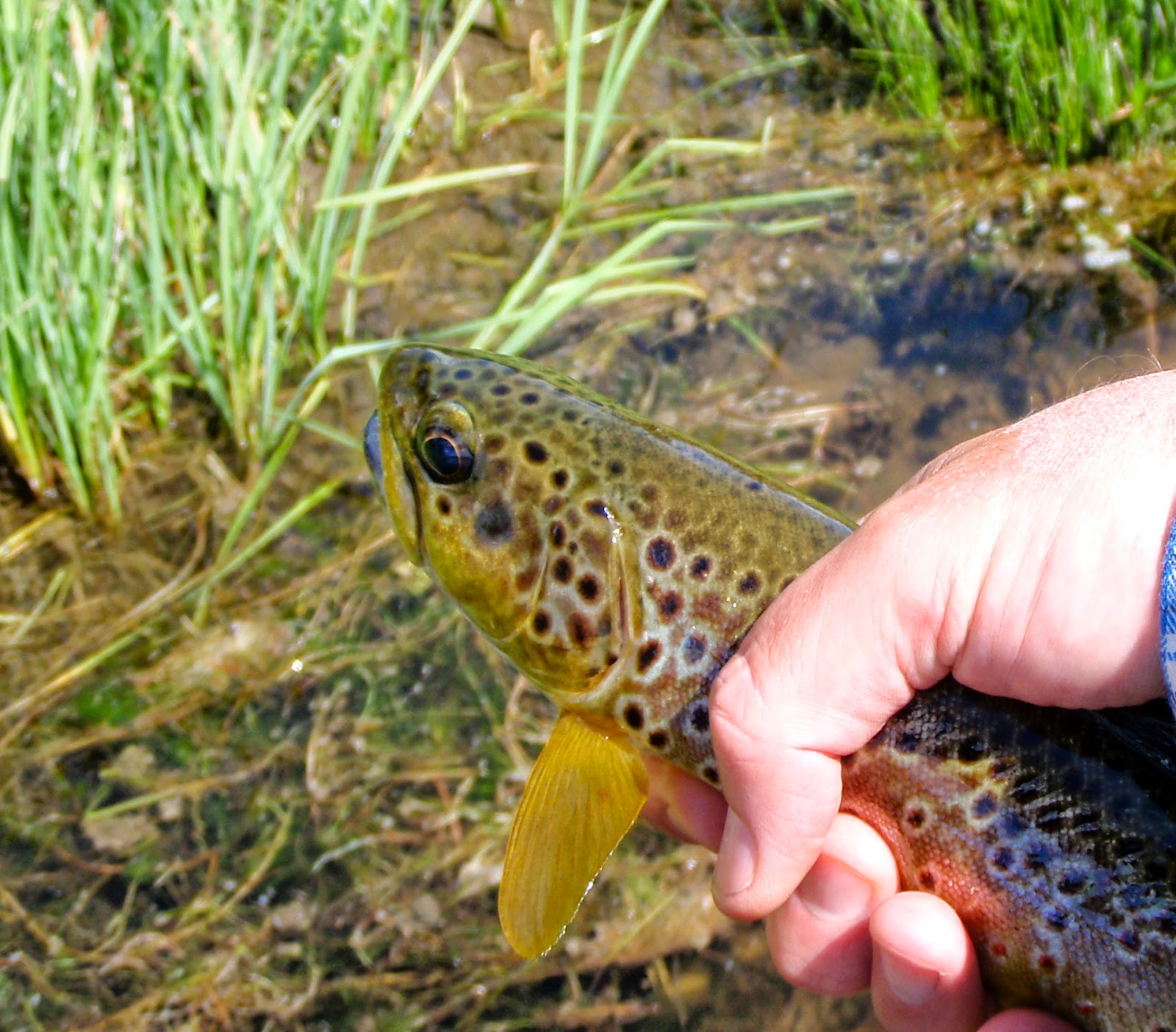 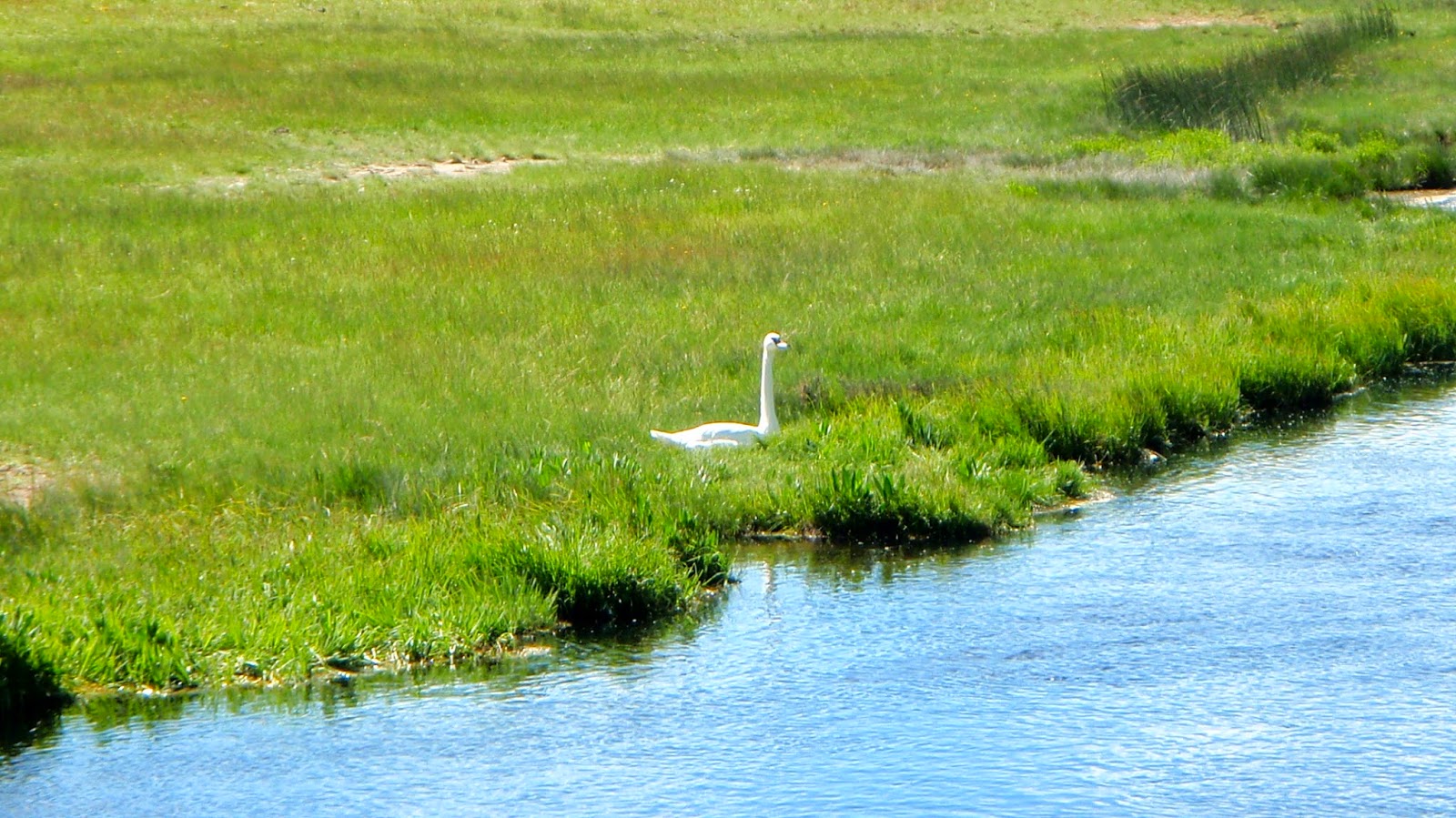 We returned to Fountain Flats, which had skunked me a few nights prior.  This time I decided to head down river and change my tactics - no more messing around with dry flies!  I got to a big bend and saw the above bird chilling on the bank.  I arrived at the confluence of Nez Perce Creek and started with a caddis bh emerger.  I caught a couple of nice fish.  I moved a little down stream and decided to high stick and dead drift a size 14 lighting bug: I managed to catch more than a dozen fish in about an hour, including a bow over 12 inches and a couple of nice browns. 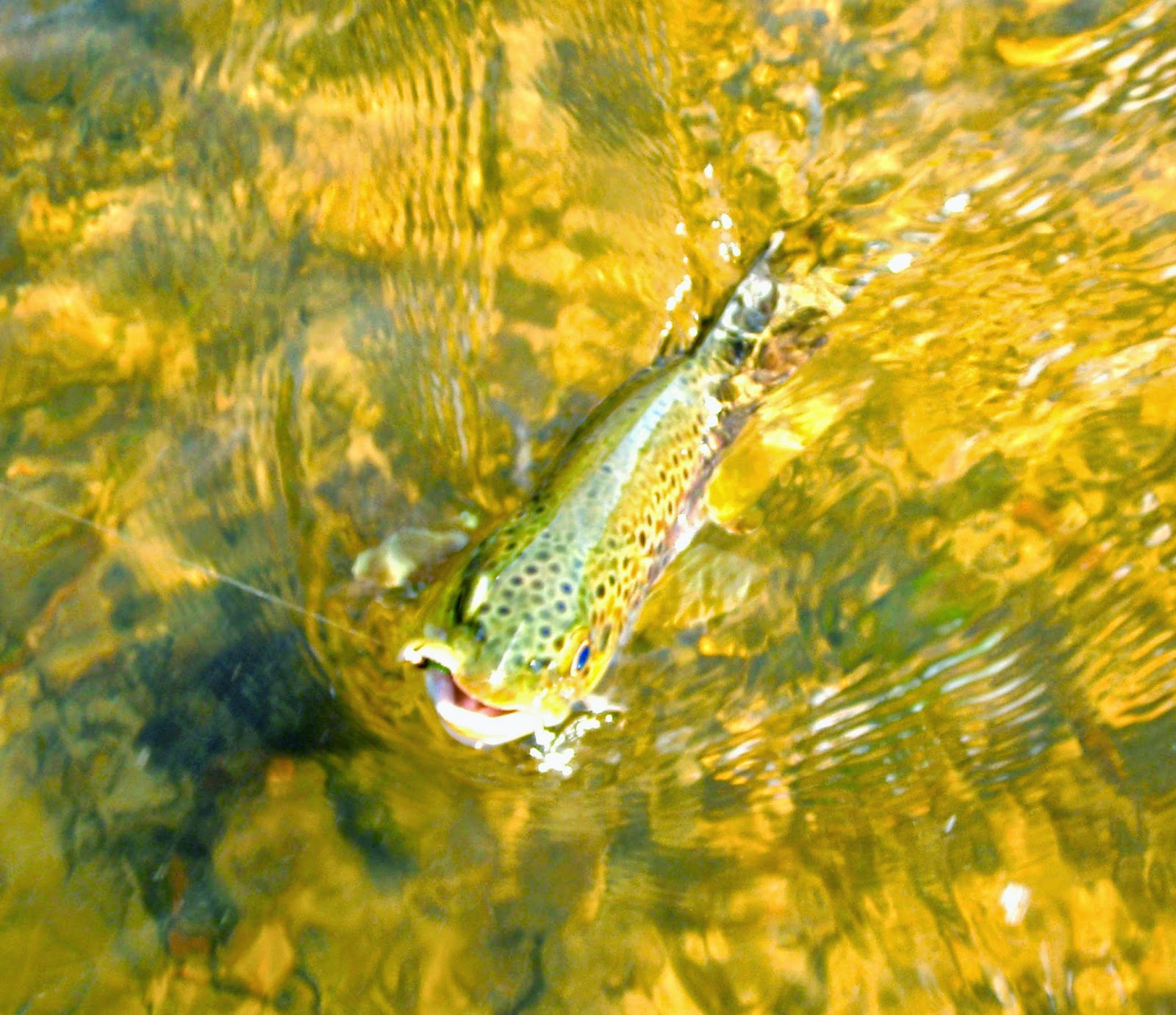 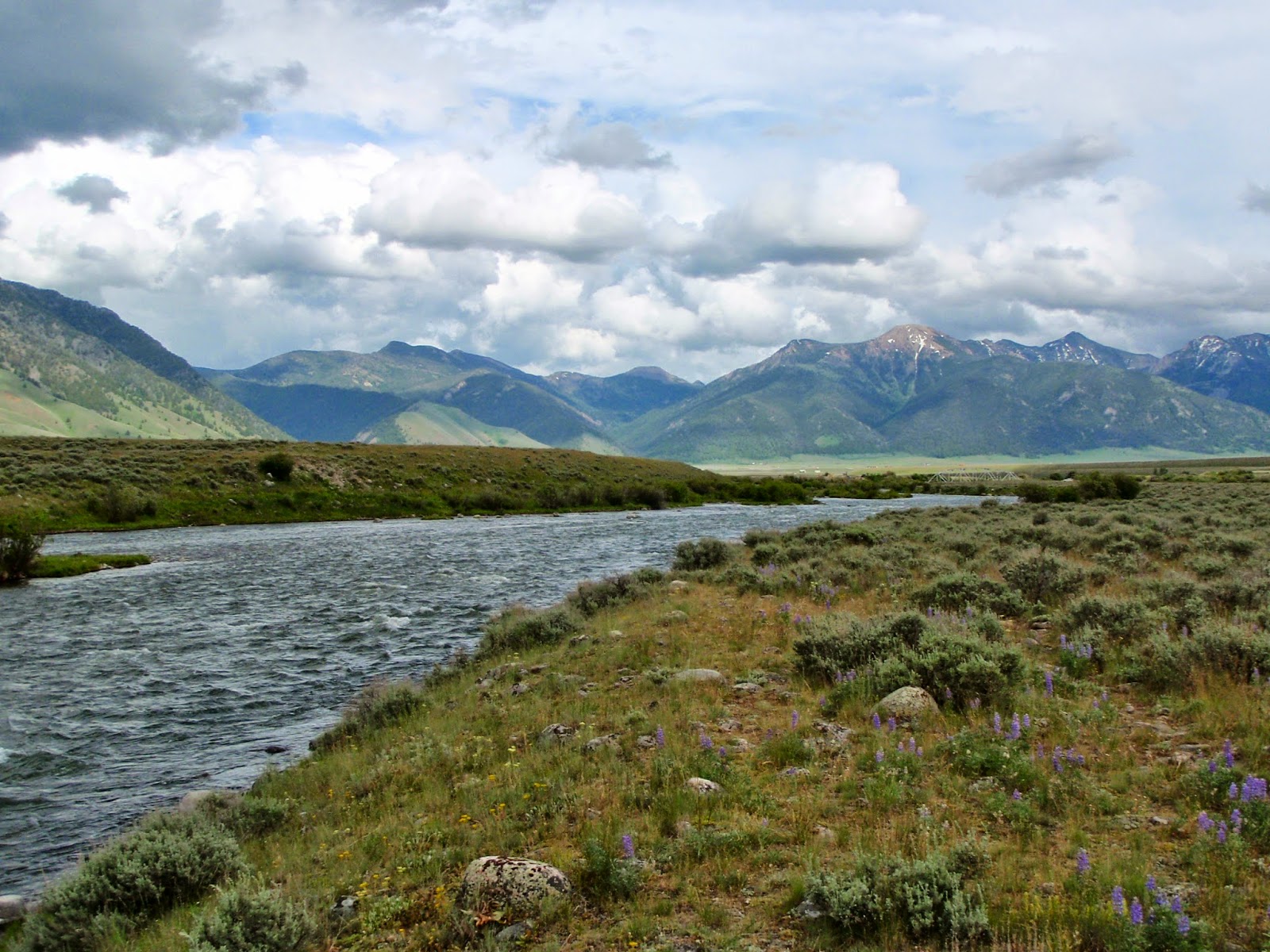 We fished the Madison at $3 bridge for a few hours on June 26th and 27th.  The first evening I headed downstream on the far bank all the way down to the private property.  The wading was very tough: slippery rocks, heavy water, and lots of wind. Unfortunately, I didn't change my leader when I started - I had an old leader tied down to 6X tippet with a big girdle bug.  I paid the price for not paying attention to details. I hooked into a very large bow - probably 21 inches.  I had him on for a few minutes. He jumped 3 times, demonstrating his power and size. I was determined to keep him out of the middle of the river, so I held the rod sideways towards the bank and man handled him to the slower water.  He was withing 20 feet of me after a few minutes when he decided to bolt out towards the middle of the stream.  The 6x was simply not enough for this fish: he snapped the line.  Oh well - it was a lot of fun fighting that fish. I worked my way down stream and picked up a few 10 inch browns.
We returned to $3 the following afternoon.  The weather was rough and there were very few flyfishers on the river.  I went downstream again, but stayed on the parking lot side.  I concentrated on the heavy flow; swinging a large girdle bug through the heavy current. I managed a nice bow that took quite a bit of time to land.  This time, though, I had 3x tippet, and got him to hand.  I worked my way down to the large house on the hill and picked up another brown for my effort.  We finished both days with dinner at the Grizzly, which was awesome. Good food and good service. 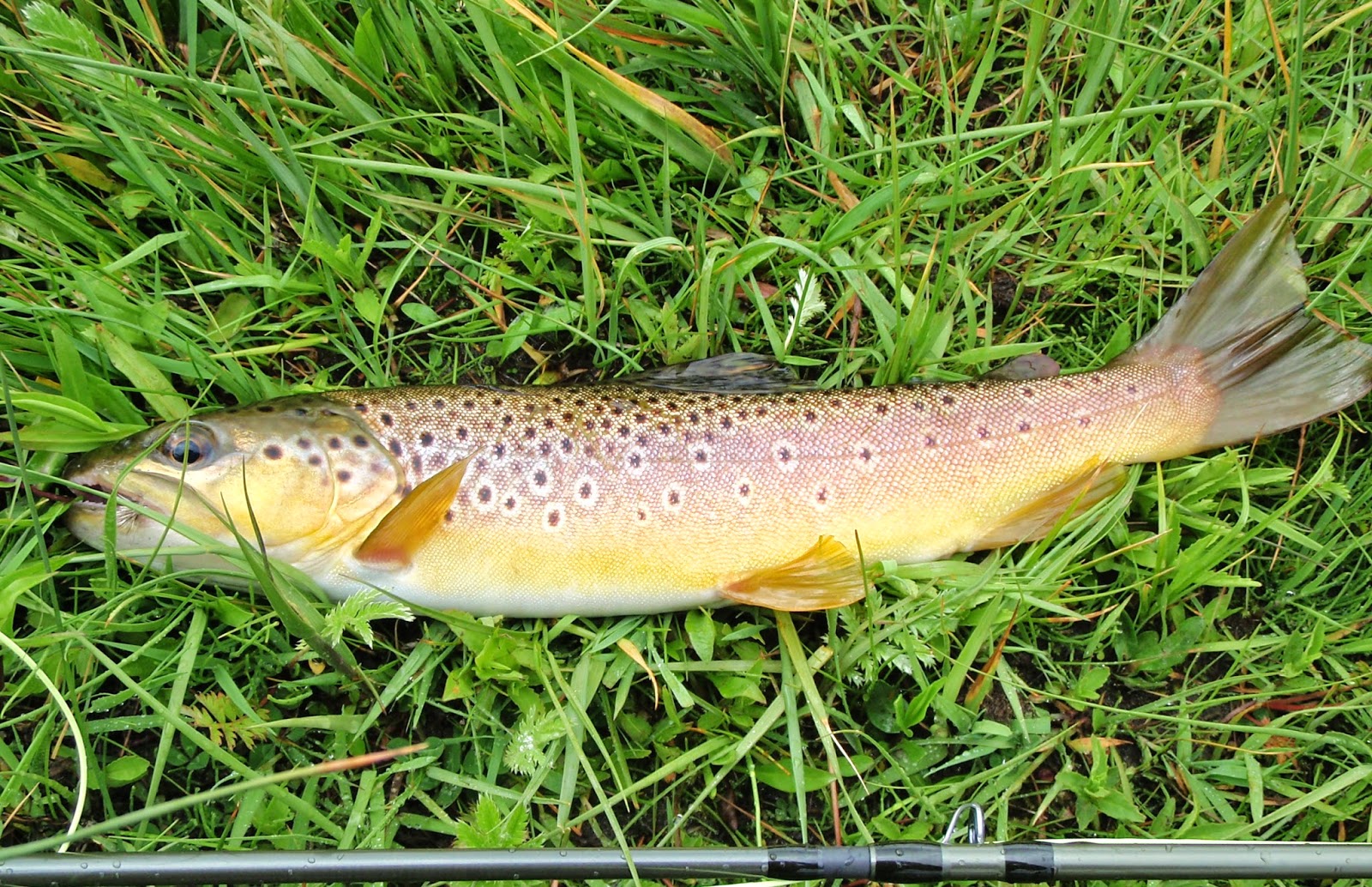 We went back to the Firehole today. I worked my way down from the old iron bridge towards muleshoe bend.  Right after the first big bend there is an island that splits the river.  I saw fish rising, but the hatch was sporadic. I managed to land the above pictured brown, in addition to a 14 inch bow.  I ended up catching 15 or so fish.  The brown shown above was my best fish of the day.  Once I got to muleshoe it was crowded, but I caught a number of rising fish before working my way back up stream.  I was amazed at the geiser shooting water right in front of some fishermen tossing dry flies in the mist.  I also saw a raven and osprey fighting over a fish in a mid-air battle that continued back and forth through the bend for at least five minutes - remarkable.

When I put away my waders last night I realized I was a little wet.  We stopped by the fly shop, where I purchased some aquaseal and fastcure.  We then drove up to the area near muleshoe bend.  I figured I would repair my waders and watch the other guys fish.  After about an hour, I rigged up my 4 weight and tried fishing a dry from the bank.  I quickly caught 3 nice browns above the old iron bridge.  I then waded down a little ways towards muleshoe.  Two guys from our group were fishing a nice run on the opposite bank.  The wind picked up and started blowing directly towards me, so I switched to a two bit hooked.  I immediately hooked a large bow that snapped my 5x tippet.  Even after he broke off, the fish continued to jump very high in the air for the next couple of minutes, apparently trying to spit the hook he had stolen from me. I tied on a lightening bug and highsticked my way to a dozen fish, with the majority being browns.  Most were in the 9-12 inch range.
We then drove over to the Gibbon below the falls.  Our group of four split up.  I eventually headed downstream, wading the middle of the river and chucking a red ass caddis to each bank.  I hooked a nice brown, but couldn't keep him on the line.   I managed to catch a half dozen or more fish over the course of the next hour.  We then had a couple of beers and decided to check out the evening hatch at the meadow on the Firehole.  Up and until this point, I had experienced a really good day.  I had landed well over 20 fish, and I thought I had it figured out. Boy was I wrong. When we got on the river the most prolific hatch of caddis I've ever seen was in full bloom.  Fish were rising everywhere, sometimes within a few feet of where I was wading.  I spent the next two hours trying 15 or more flies trying to get it dialed in, but without any success.  Of the four of us, three of us were skunked.

Madison and Firehold River in the Park 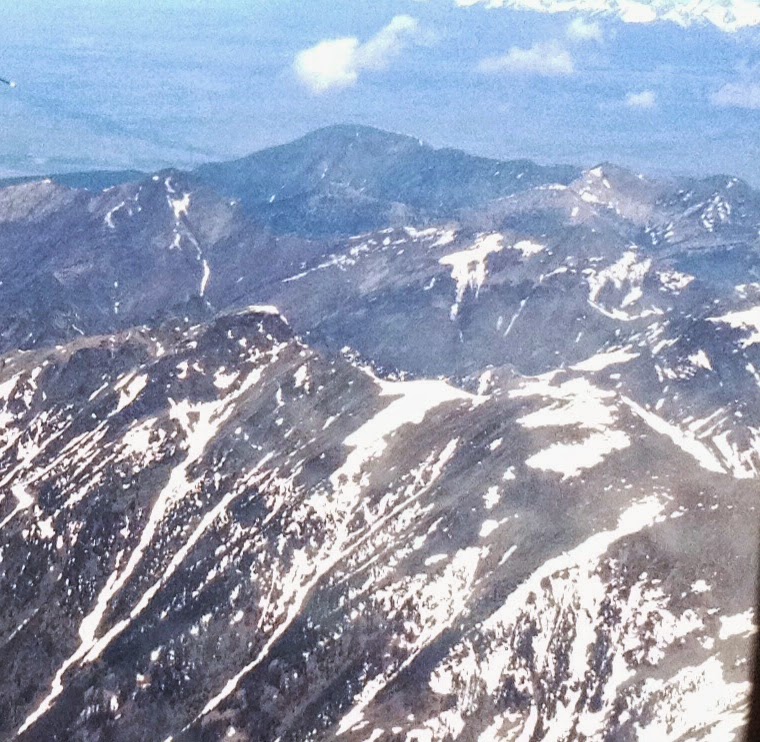 We arrived in West Yellowstone late Tuesday afternoon.  We checked into our rather small room and drove into the park to fish the Madison at 8 mile for evening caddis.  The fishing was pretty tough.  I caught a couple, but nothing impressive.  After a heavy rain we drove up to the meadow on the firehole river.  After catching 3 browns on a white caddis it was dark and time to had back to West Yellowstone.

Check out Mayfly Coffee - Doc hasn't been on the water much lately, but he's been roasting some outstanding coffee.  Check it out!  Mayfly Roasting
No comments:

I'm less than a week from flying to West Yellowstone to spend almost a full week fishing the park.  Can't wait.  I'll post some reports if I catch fish, and maybe even if I don't!