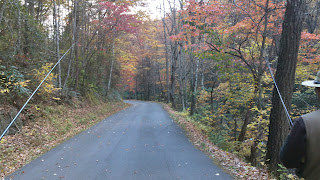 It has been awhile since I have posted a meaningful trip report after moving the family into a new pad. The Gubna and myself convinced our better halves to let us sneak off this past Sat evening for a quick overnight trip to the Tellico. We had read several reports about the DH and none of them sounded too promising. 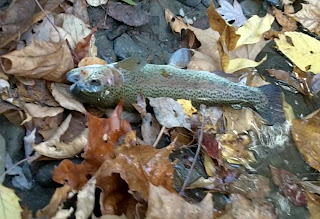 I got a report from a very reliable source that Sycamore Creek had specs in full color, so after twisting his arm a little the Gubna went along with my plan. We got to the Tellico around 6:30pm with a little light left to fish the Tellico DH immediatly upstream of Turkey Creek. We may have seen one fish, but no bumps. We woke up a little late the following morning and after rigging up we hiked downstream in search of Sycamore. We crossed a bridge, then realized that wasn't where we need to be, then doubled back. When we were crossing back over the footbridge I saw a couple of fish rising on the upper Tellico. I observed a pretty decent fish holding water and worked my way down and positioned myself immediatly downstream of him below a ledge. On my fist cast I hooked a fingerling on the copper john dropper. I didn't know he was on, which resulted in an aerial feat that most trout only dream of. He was safely released on my upstream cast, which is when I realized that it was a fish and not a leaf. My next cast resulted in a more favorable result....it also reminded me that I have a momment every now and then where I feel like I might know what Im doing. The fish I had sighted engulfed the size 14 orange stimulator. I had my first countable fish of the day. I purchased a new waterproof flip video camera a couple of weeks ago and this was its first real test. I wasn't able to take a pic but I'm working on posting the video. It was a very healthy 12in bow and I was happy. We fished out way downstream, still searching for Sycamore. I caught a 6-8 inch brown right where Sycamore enters the Tellico. The Gubna pointed out some bear scat as we hiking up the FS road that runs beside Sycamore Creek. After hiking about 1 mile upstream the Gubna started fishing some decent looking water. This is where the trip went a little south. The Gubna was fishing upstream and I was shooting some video. I put my pack back on and went looking for him, but couldn't find him.  I started fishing once I got to where the trail leaves the creek. In the meantime he started looking for me. We ended up looking for each other for the next couple of hours, which is all the time we had to fish. I ended up hiking up Sycamore far enough that I was certain I would see some fish, but I was wrong. I never saw anything, much less catch a brookie. I decided to head for the car after hiking as far upstream as I thought the Gubna would go. At the bottom of Sycamore we finally found each other. He was searching for me on the Tellico since I had success there earlier. Overall we were both a little dissappointed in Sycamore, but it always great to be able to camp out with the Gubna. He ended up catching a couple of bows on the Upper Tellico. 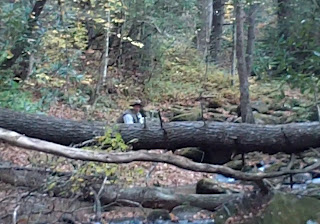