November on the HI 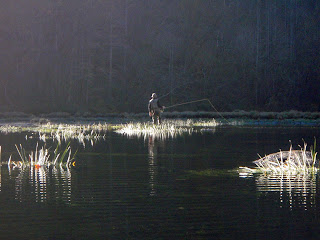 The Big Easy and I went to the HI for a couple of hours on Sunday November 7th.  It was a spectacular day, with clear blue sky and temp around 50 degrees.  We arrived just as the buzzer sounded signaling the onset of one generator flow.  We hurried across the river near the power house, and began fishing.  I started with old reliable, SHPT nymph.  I got a nice fish, 12 plus inches, right off the bat.  Easy started getting action with a BWO.  The generator shut off after about an hour and we worked our way down stream. The action slowed considerably, but we both managed a few fish and it was a wonderful day to be on the River.  I managed only one picture: Easy wading the weed beds.  A few days later, I was able to take my first guided float trip on the HI with Rob and Dane.  Rob and I met at the PH around noon to test the conditions.  I wanted a brown, so I started with a large prince dropped off a gigantic dry fly.  I got a couple of nice bows before we even started the float.  Rob had bad luck to begin with, breaking the tip off his brand new 13 foot spey rod.  We clipped the tip off, and it didn't seem to impact the performance of the rod. I've never seen someone roll cast like Rob did while we were wading.  Dane arrived about 30 minutes after we started, and we put in right away for a short float. 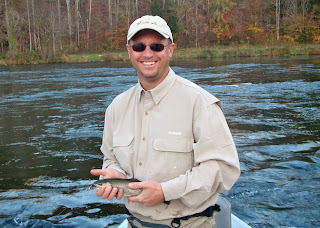 Rob used a big ugly hackle olive streamer, and immediately started catching fish.  I tried dry fly fishing almost exclusively, missing a ton of fish.  Rob was on fire.  He must have caught 15 bows, including the one pictured above.  I managed 7 bows, and one small brown.  I caught the majority on a size 20 Adams as the sun disappeared.  It was a great trip and I learned a lot during the float.  Now, it's time to get ready for the big trip next weekend!