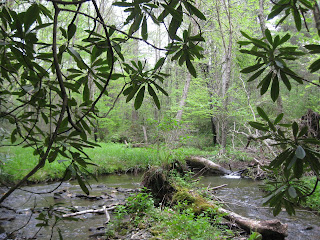 It is a sunny friday afternoon. Mayflies are hatching and fish are rising on Bone Valley Creek in the Great Smokey Mountains National Park. Patrick, Eric, and I met at the WalMart parking lot at 5:15am that morning to embark on a weekend fly fishing trip to Bone Valley backcountry campsite 83, which is a major tributary to Hazel Creek. We caught the 9am shuttle from Fontana Village Marina, then hiked 6 miles upstream along Hazel Creek until we arrived at site 83. 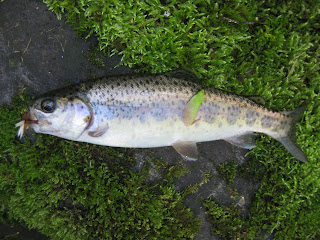 We were somewhat surprised to discover that we were the only ones staying at 83. It has a reputation as being a crowded spot....for a good reason. It is positioned right beside the confluence of Bone Valley and Hazel Creek and allows for great access to both waters. So the plan was to set up our camp then hike the additional 1.5 miles upstream to Hall Cabin and fish Bone Valley Creek along the way. Well, after I rigged up Patrick was gone. I assumed he and Erick started fishing BV while they were waiting for me. I noticed a pretty nice hole a few yards from our campsite so I approached it from downstream. I was wet wading and the water was colder than I expected, but I adjusted pretty quickly. I stopped to re-assess where I wanted to cast when I noticed a small fish rise. I eased over to my the left side of the riffle I was standing in and made an medicore with my Tenkara rod. I kept the rod tip high with the line off the water.....the little fish inhaled the size 14 cahill. It was a 5-6 inch brown that got off as soon as I got him to hand. I missed 2 more fish in that same hole. I worked my way upstream fishing riffles and missing fish. I finally ran into Erick.  He had caught 2 bows on a 16-18 Adams. Patrick was nowhere to be found. I went further upstream looking for him, then saw a another nice run. I eased my way in and after missing a couple more little guys I hooked a 7 inch rainbow. I had hooked him in the corner of the mouth and the pressure had torn his jaw. I decided to keep him for dinner, so I hiked back down to sink him next to the beer. I also went back down to look for PC. He wasn't there and I had no idea if he went upstream or downstream on Hazel so I went back up BV to see what Erick wanted to do. Erick had caught another rainbow. The fishing was hot so we decided to keep fishing BV and see if Patrick ever showed up. We both ended up with 5 fish in about 1.5 hours of fishing, with the best fish being around 10 inches. We had only fished upstream about 1/4 mile. It was getting close to dinner time and we were getting a little worried about Patrick so we went back down to the campsite. Patrick was there and he looked pretty worn out. In classic Patrick style he had fished downstream on Hazel and ended up getting stuck in a gorge. The only was he could get out was to wade across on the opposite bank and bush wack his way back upstream. The good news was he had caught 4 rainbows 6-9 inches on a soft hackle hares ear. 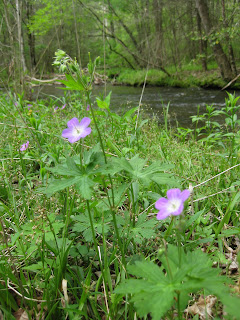 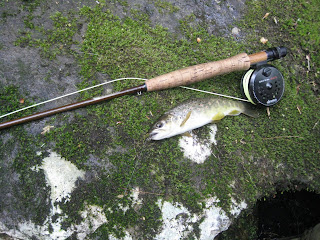 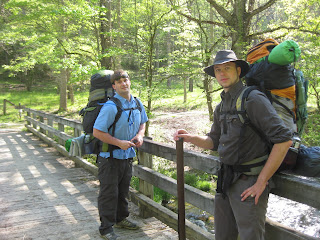