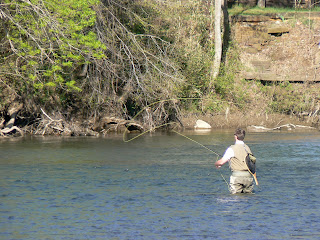 We decided to get out of Chattanooga for an evening so we used a raincheck and booked a night at Bear Cove Lodge near Reliance. Being a family trip, I realized I would have very little time to wet a line, but I was excited to fish an area of the river I had never fished before. The river-front property at Bear Cove Lodge, while not the prettiest section of the river, presented a plethora of fishing opportunities. I suited up and tied on my trusty bugger at about 5:00 p.m. The water was down. As I was wading towards a nice run, there was an amazing hatch and fish rising all around me. I tried a few different dry flies without success, and although I thought it was a little early, I ended up trying a size 14 Sulphur that a friend had loaned me this time last year while fishing the Toccoa. Despite the fact that I didn't think sulphur's were hatching, it proved to be the ticket. It seemed like very cast resulted in a strike - even on the drag/emerged. I missed the first 10 strikes. I was frustrated at my slow hook set, so I was determined to set quick on my next cast. Sure enough, a 2 o'clock cast, a 1:30 hit, and a quick tug - suddenly, a 9 inch rainbow is flying about 30 feet through the air right at me. He landed about two feet in front of me! I continued fishing the Sulfhur for another 45 minutes, landing about a dozen SNIT before retiring to the Lodge.
The next morning, after a trip to Ellijay for breakfast, I convinced the wife to take a short float in my SOAR canoe. We floated the Quality Zone, which incidentally, is about to be "deregulated." A three mile float from Big Bend to Reliance was quite enjoyable. I only fished a few minutes, but there were plenty of fish - more than I think I've seen in recent years, and quite a few fly fishermen along the way. I managed one fish - a 12 inch bow - but the float wasn't about fishing. All in all, I was quite pleased with the fishing. The HI may be on the rebound.