Today turned out to be the last good day of fishing on our trip - at least for me.  We decided to try a spot we've never fished: the Madison River just above Earthquake Lake, but below Hebgen Lake.  I rigged up my 10 foot four weight and tied on a huge stone fly with a tungsten dropper.  I worked
upstream and missed a few fish. I wanted to cover some water, so I worked downstream and got into a few fish.  I then worked a little further down river to some relatively non-descript water and hooked into a really nice Brown.  I had a 15 foot leader, a 4 weight rod, and 6x tippet off the stone fly.  The Brown was on the bottom fly.  I played him for a while - it was fast water and I was on the bank.  I walked downstream along the bank trying to get him into slower water near the bank.  I got him close a few times - close enough to see that it was a really big brown, but I couldn't get him close enough to get a shot at netting him.  After a few minutes, I jumped in the water, and tried to tire him out.  I worked him back and forth, and let him run when he wanted.  I waded down river, which turned out to be a mistake.  He got to a spot in the river with a bucket.  The fish hit the bucket, and bolted down stream.  SNAP!  I was about as mad as I have ever been losing a fish. I figured that was my best shot at a huge Madison River Brown.  I went and sat down for about five minutes and debated on going back to the car.  I gathered my spirits, rigged back up with 5x, and crossed the river to a little island.  From there, I proceeded to catch fish.  They were not browns, and they weren't huge, but they were all very nice fish.  I ended up with 10 in about an hour that were in the 16-18 inch range. 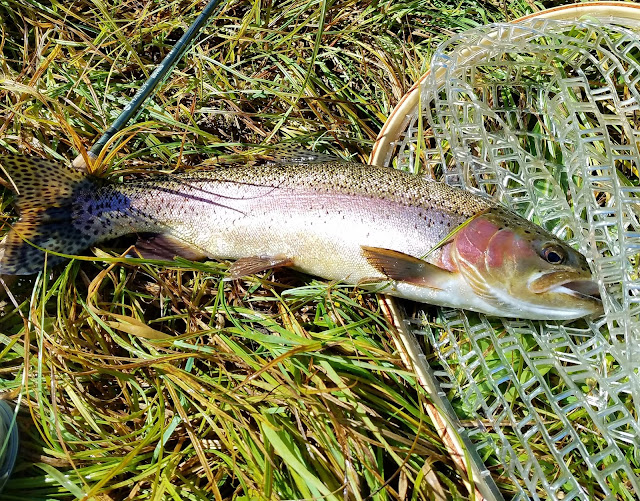 After two hours of fishing, the rest of the crew was ready to head downriver.  We went back to $3 Bridge.  I caught four, with one decent bow, but it was hard fishing. The highlight was watching 81 year old Jimmy catch a beautiful rainbow. 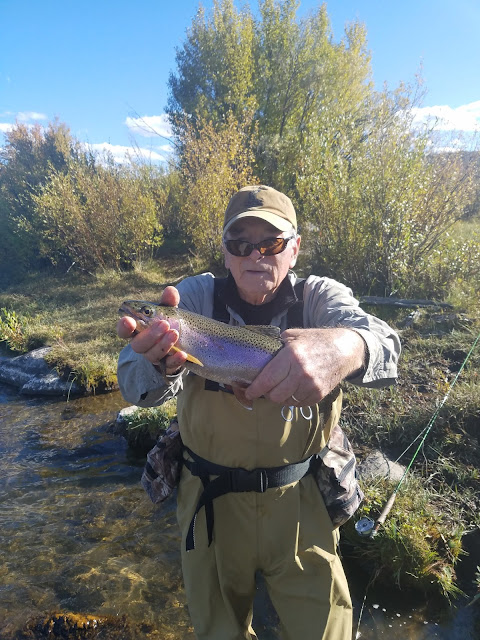 We also fished on 9/28 and 9/29, but the fishing was pretty bad. We tried the Lamar Valley, including Soda Butte, Lamar, and Slough on 9/29.  We caught 3 fish the entire day between the five of us fishing.  The next day was not much better.  We fished the Gibbon and Duck Creek.  We caught less than 10 fish the entire day between the five of us. That being said, 9/30 happened to be Jimmy's 82nd birthday.  While the rest of us fished up and down Duck Creek without so much as a nibble, Jimmy caught and landed a wonderful 18 inch rainbow.  Somehow, that made up for the otherwise lackluster fishing.  I hope I'm still alive and well enough to fish Yellowstone when I'm 82!
Till next time.