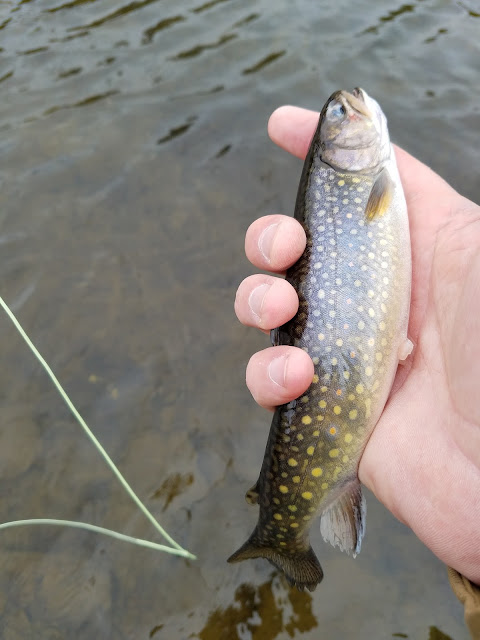 I had a family vacation that took us on a long road from Tennessee to New Hampshire, with a number of stops along the way.  I brought my fly fishing gear just in case I got a minute or two to wet a line. Apparently, the fishing wasn't too fruitful in the area where we were staying, which was just a short distance south of the White Mountains.  We were right next to the "Pemi", but everyone I spoke with said it was "dead".  I decided to check out the Mad River, and as I was driving along the river, I saw fish rising in a large pool just above a dam.  The next morning I woke up and hit the Mad River for a few hours.  I caught about a half dozen brook trout in the pool of rising fish, and missed a great many more.  These were obviously stocked brook trout. I worked my way down river for about an hour and didn't see another fish.
A few days later I decided to try the Baker River.  I couldn't find much information on where to fish, so I just started following roads the ran along side the Baker.  I went over a bridge and spotted a good size fish.  I rigged up and put on a big bugger.  About 10 casts later, and a pretty good fight, I ended up with this strange looking fish: 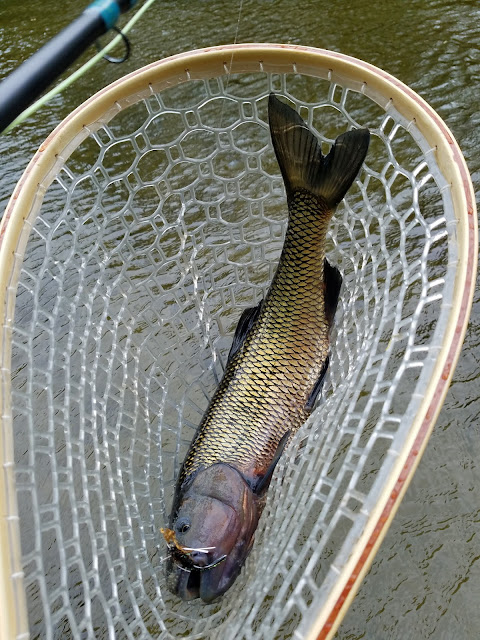 I thought it was a carp, but apparently it was a huge minnow called a Fallfish.  I worked my way up river to a beautiful area with nice runs, deep pools, and lots of bends. I pounded the water hard for about an hour, and except for one chase by a small brook trout, I struck out.
Admittedly, I was disappointed by the fishing in New Hampshire. Of course, it could have been the time of year, my ignorance on fishing locations, etc.
Strangely enough, the highlight of the trip (in terms of fishing) was fly fishing for about 10 minutes on Walden Pond. We didn't catch anything, but my boys and I had a good time sharing the water with Thoreau.