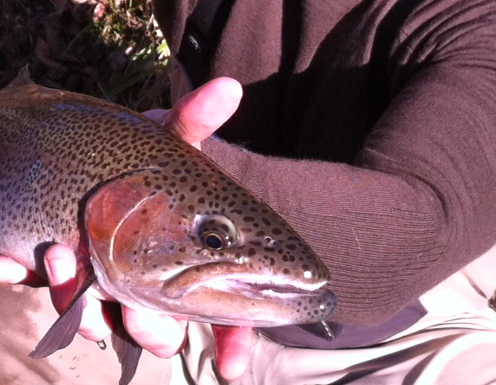 Doc, EZ, The Rod, and The Gubna embarked on a float down the Toccoa last weekend. I purchased a small one man toon for the occasion because Rod's toon only holds three.  My little toon turned out to be a blessing.  The flow was low, which meant quite a bit of dragging the raft over the shallow areas of the river.  We finally got on the river about 10:00 a.m.  It was slow going at the beginning, and we probably spent too much time on the first quarter mile stretch.  We eventually got down to some better water and started catching fish.  We stopped at one nice run, and we all picked up a few decent fish, including this one: 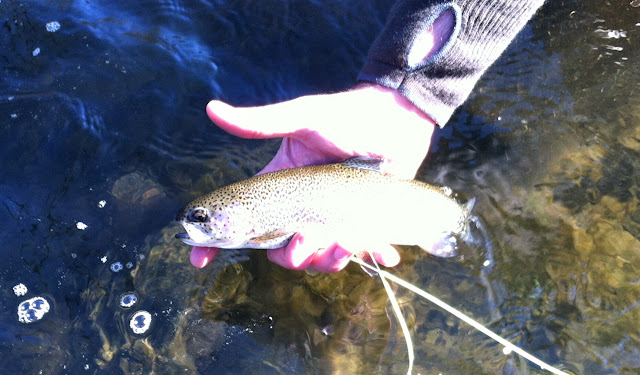 I started out with a SHPT, but quickly changed to something a little different.  Out of pure laziness, I grabbed the first fly I found in my bag (it wasn't even in a case).  I was having a hard time at the beginning figuring out how to manage my gear, fish, and guide the toon down river.  Strangely enough, the fly I put on, a fly I don't know by name, turned out to be the ticket.  We started to see a sporadic hatch of bwos.  I'm convinced a bwo emerger would have done really well on our float.  At any rate, I was picking up a good number of fish on the mystery fly.  Doc and Rod picked up a few as well.  We got to a spot that I know holds some big fish.  I saw a 30 plus inch bow swim under my toon, and immediately jumped out of the raft and rigged up a huge streamer on my 8 weight.  Rod joined me in trying to entice the pig, but neither of us were successful.  While we were chucking meat, EZ picked up a nice bow on an adams: 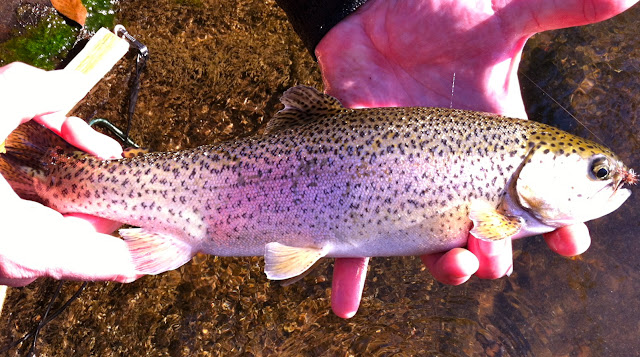 We finally got down to a great section of the river . . . Rod and I started chucking articulated streamers on our 8 weights to an area we suspected held big fish.  EZ and Doc stayed up-stream working some nice runs.  After a few minutes of fishing the articulated, I finally got a decent fish:  Click here.
About the same time I picked up the big bow, Doc landed a nice bow upstream.  We were now running out of daylight, so we picked up and didn't fish the last couple of miles.  I probably enjoyed the trip a little more than the other guys, but I think we all did pretty well.  Nobody did great, but everyone caught fish.
I was able to get a measure on the pig: approximately 22 inches. We didn't catch any browns on this trip, but plenty of nice rainbows.