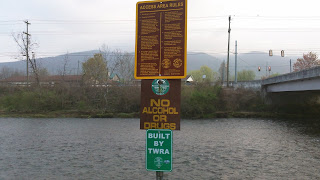 In 1996 I was standing in the Watauga River in Northeast Tennessee holding a fly rod watching trout rise, but having no idea that they were eating insects, much less flies.  I was 19 back then and getting ready to move to Montana. I was drawn to fly fishing, along with millions of others, by a River Runs Through It. I didn't  know anyone who knew anything about fly fishing and I was too impatient to read a book about it. That left me clueless about bugs, knots, dry flies, wet flies, nymphs, and about everything else in between. Fast forward to this past Saturday....I was standing back in the Watauga for the first time since that day in 1996 and this time I caught a couple of fish to boot. 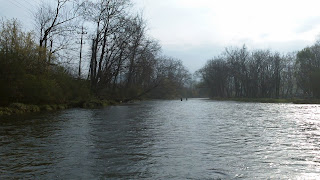 I drove to my parents house in Flag Pond, TN on Friday night afterwork, so I didnt arrive until around midnight. Before going to bed I checked the generation schedule and to my dismay TVA was going to start 2 generators at noon. My plan for an all day fishing trip was quickly altered to a few of hours. I arrived at the Hunter Bridge boat lunch around 8:30am and was in the water by 9. I knew caddis were due to start hatching anyday so I had rigged up a double caddis pupa and casing setup, but after a few cast I altered the plan. It was overcast and storms were rolling in that afternoon. There was a decent BWO hatch going on in size 18-20. Fish weren't rising to them so I tied on an 18 emerger and hares ear nymph. The switched payed off on my 2nd cast with a small bow to hand. After missing a couple of soft takes on the emerger I managed to get 2 more small bows. I was starting to see some fish rising and noticed a decent fish feeding on the far bank. I worked my way over upstream of my target and on my second cast I hooked the fish and turning him in the process. I was only about 10 yards upstream and got a very good look as he turned on the surface casually catapulting the hares ears over my left shoulder. It was a very good fish. I was feeling pretty good about myself even though I lost the fish. I was tuned into what they were eating so there wasn't any reason to think more fish wouldn't be brought to hand. This was the day I needed. This was the 15 plus fish day I was looking for......then the clouds parted, the sun banketed the water and the fish were gone. Well maybe not gone but definently not eating BWOs anymore. For the next hour I worked a very good looking 100 yard stretch without a bump. I would have switched to a bugger if I hadnt left my bugger box at my parents house. The clouds eventully came back and I managed to loose another good fish, not as good as the other one though, but I didnt catch anything else that day. As I was exiting the river and the water was rising I reflected back to 1996 and realised that so much had changed in my life since then, but what hasn't is the Watauga trout is still winning and for some reason that didn't bother me as much as it should have. 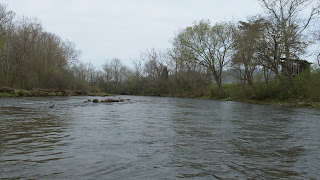